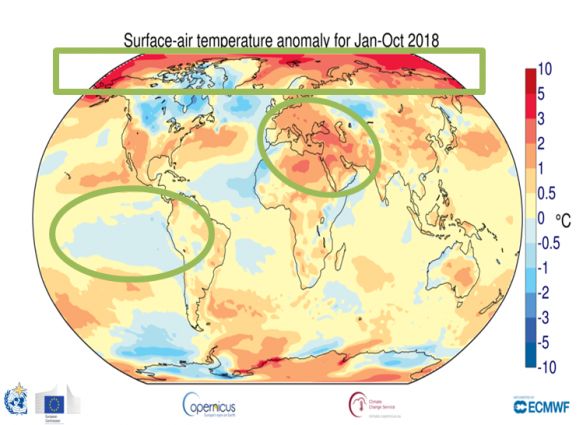 The global temperature in 2018 today is the fourth largest in the history of meteorological observations, the UN said on Thursday, stressing the urgent need for action to curb global warming.

In a report published on the eve of the COP24 climate summit in Poland, the World Meteorological Organization indicated that 20 of the last 22 years were the warmest in the history of observations, and that 2018 was the fourth warmest year.

“This means that the last four years – 2015, 2016, 2017 and 2018 – are also the warmest in this series,” says the UN preliminary report on the state of climate in the outgoing year. “The trend of global warming is obvious: it is in full swing,” said WMO head Petteri Taalas to journalists in Geneva.

The report notes that the global average temperature in the first 10 months of the year was about 1 degree Celsius higher than in the pre-industrial era (1850–1900).

We repeat once again that we are the first generation that fully understands climate change, and the last generation that has the ability to do something. Given the level of greenhouse gases in the atmosphere, by the end of the century we can see a temperature rise of 3-5 degrees. If we use all the known fossil fuel resources, the temperature increase will be much greater

Delegations from nearly 200 countries will arrive in Poland next week to host the COP24 climate summit, aimed at updating and developing the Paris Agreement.

The new version of the agreement should come into force in 2020 and will be designed to limit global warming at a level below 1.5 ° C. But experts warn that by 2100 it is likely to exceed the 3 ° C mark, and governments need to strengthen the planned measures.

“Every degree has an impact on many things: human health, access to food and fresh water, the disappearance of animals and plants, the state of coral reefs and marine life, economic productivity, food security, the sustainability of our infrastructure and cities, the rate of glacier melting, and the future low-lying islands and coastal areas “, – said in a statement, the deputy head of the WMO Elena Manaenkova.