27 dolphins beached on the coast of the Gulf of California 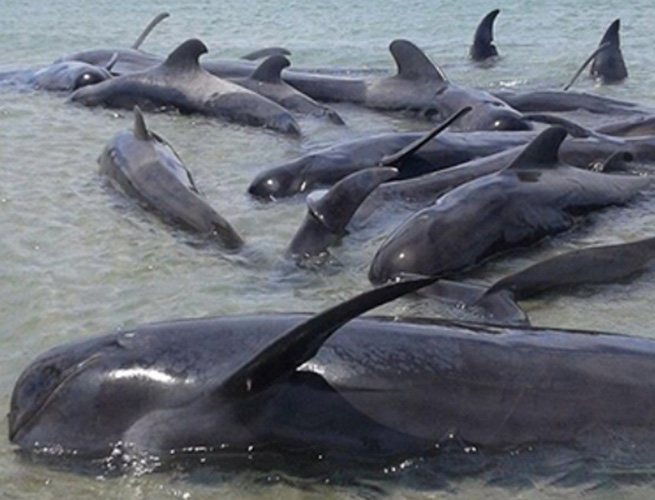 From 27 pilot whales – the Dolphin the size of a small whale beached in shallow water in Baja California. The rapid tide did not allow of sailors and the specialists on the protection of animals to save them. To evacuate was only two adults and one cub.

The rescue operation took place under the leadership of the Federal Prosecutor for environmental protection of the country and representatives of the Navy of the country. Pilot whale became stranded on the coast of the Gulf of California, South of San Felipe. Rescue operation, with the participation of local fishermen, representatives of the national Committee for fisheries and aquaculture, and other experts was held with a dinner Saturday, may 14, until the early morning hours of Sunday, may 15.

All efforts were practically useless. Because of the low tide at dawn Bay, where the pilot has shoaled to such an extent that the animal was unable to return to deeper water. Managed to save only two adults and one cub. As notes the edition, the pilot whale, which was traveling on deep water, persistently returned to the shore.

It is assumed that the whales were disoriented because none of the animals did not have any injuries. There was also no networking gear and any other signs of anthropogenic impact, which would be the reason why the animals beached on the shore.

The whales are protected in the United States in accordance with the Law on the protection of marine mammals and have a special protected status in Mexico. These animals reach a length of 8 meters. Whales prefer the open sea and rarely appear off the coast. They sleep during the day, and at night forage. They are able to descend more than 600 meters. As a rule, whales live in groups of several dozen animals and follow the leader. They are able to reach the age of 60.