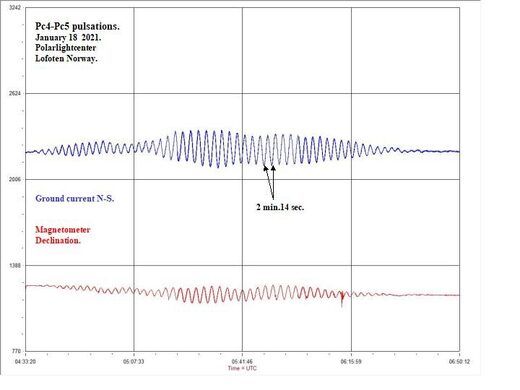 A musical note from our atmosphere. At about 06.30 in the atmosphere over Norway, pulsations of the magnetic and earth currents were recorded. Approximately 2 hours with a time period of 2 minutes 14 seconds. Continuous geomagnetic ULF pulsations in the range from Pc4 to Pc5.

For the first time this year, and sometimes only once a year. It’s great to see that our atmosphere can make this possible. This phenomenon can also be seen on other magnetometers, for example from Abisko and Kiruna, at about the same location of the auroral oval.

High above the Arctic Circle in the Lofoten Islands, Norway, citizen scientist Rob Stummes operates a space weather monitoring station. Its sensors detect earth currents, auroras, radio bursts, and disturbances in the earth’s magnetic field. Yesterday he says, “I got a musical note from the magnetosphere.”

“At about 05.30 UTC on January 18, our local magnetic field began to oscillate back and forth in a rhythmic pattern,” he says. “Electric currents in the ground did the same. It was almost a pure sine wave – like a low frequency musical note. The episode lasted over 2 hours. ”

Strainmes has received such data before, but they are rare. “I only see this picture about once a year,” he says.

A magnetometer in Abisko, Sweden recorded the same waves.

Imagine that you are blowing on a piece of paper that makes it flutter. The solar wind does the same with the earth’s magnetic field.