A black ring appeared in the sky over Britain 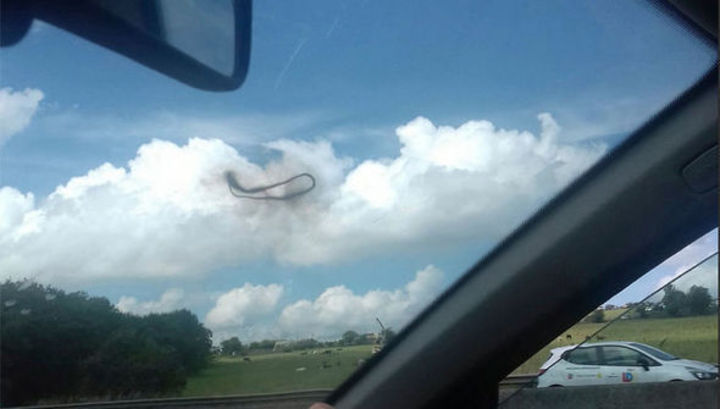 In the sky above the UK, a strange black ring was photographed. Clear explanation for this phenomenon, none of the specialists can not yet give.

The picture was taken on July 9 near the town of Birkenshaw in West Yorkshire, the 22-year-old Kimberly Robinson, who was driving with her companion in the car at the time.

According to the girl, the ring looked like a smoky, but at the same time kept a clear shape, reports Express. In this case, according to local firefighters, there were no sources of smoke in the area.

Representatives of meteorological services also could not confirm that the observed phenomenon is of natural origin. However, the journalists managed to establish that around the same time, in the vicinity of the city, a historical reconstruction of one of the battles of the Second World War was arranged, during which pyrotechnics was actively used.

Another possible explanation for the phenomenon put forward a member of the Duma Defense Committee, the cosmonaut Roman Romanenko. In his opinion, the ring can be followed by a forced bend of a fighter with a full tank of fuel under certain weather conditions.

The deputy explained that because of different levels of humidity in the atmosphere there are vortexes, which then can remain in the air for a period of about 20 minutes.

Such rings in the sky are observed from time to time in different parts of the globe. So, in 2016 he was observed over Disneyland in California, and in April of this year – over Novosibirsk. Then this phenomenon was explained by the exhaust of soot from the drift show that was taking place in the city.