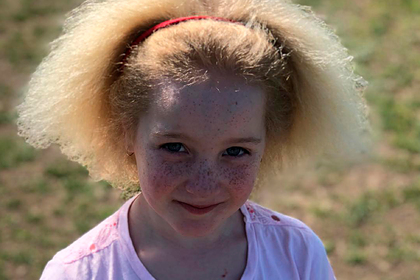 An Australian child with an abnormal hair structure that is the result of a rare genetic disorder has become famous online. The Daily Mail reports.

10-year-old Shilah Madison Calvert-Yin from Melbourne was born with tangled hair syndrome. The hair shafts of the girl are naturally heart-shaped. Moreover, there is no straightening protein in their structure, and therefore the curls always fluff and look voluminous.

It is noted that at an earlier age, Shyla hid her hair under a scarf or cut her hair, as she was constantly abused by others. For example, other children laughed at her and said that she looked like she had been electrocuted.

Now the heroine of the material is no longer ashamed of her unusual hair. “I love my hairstyle, but at the same time I hate it, especially when the wind is blowing, because I can’t see anything!” – she admitted and added that a hairdresser who specializes in African hair was able to collect her strands in pigtails and remove them from her face.

Celeste’s mother decided to share her daughter’s story on social networks to draw public attention to her unusual illness. At the moment, more than 15 thousand people have subscribed to her Instagram account.

Earlier, the abnormally thick hair of a newborn baby surprised the hospital staff. Jordanian Alexandra Bond explained to reporters that after the birth of her daughter Maya, the doctors told her that they had not seen a newborn with such long hair during her entire work in the hospital.