A child with two faces was born in Indonesia 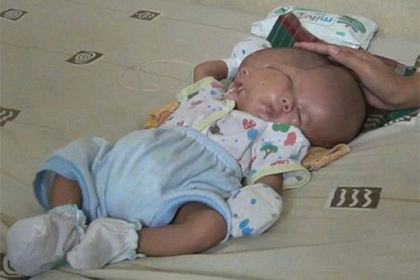 In Indonesia, a child was born with two faces and a pair of brains imprisoned in one head.

A boy named Gilang Andika was born in the Indonesian city of Batam. At the moment he is two months old. He has one body, two arms and two legs, but due to the fact that his twin brother could not develop in the womb, his head was deformed. This pathology occurs in one of 250 thousand cases.

The edition notes that the deformation of the head and the presence of the brain and the face of the twin brother exposes the life of the child to danger – an excess liquid accumulates in the head. Local doctors stated that they can not help their parents in this situation. While the child remains in the hospital under the supervision of specialists.

Gilan’s mother said that she did not know about the condition of her son in the womb until she was born. The woman was examined three times by ultrasound, but she did not show anything. The doctor, who looks after the child, said that the parents were advised to go to a hospital in Jakarta with good equipment and first-class surgeons.