A huge piece of ice fell from the sky in Scotland 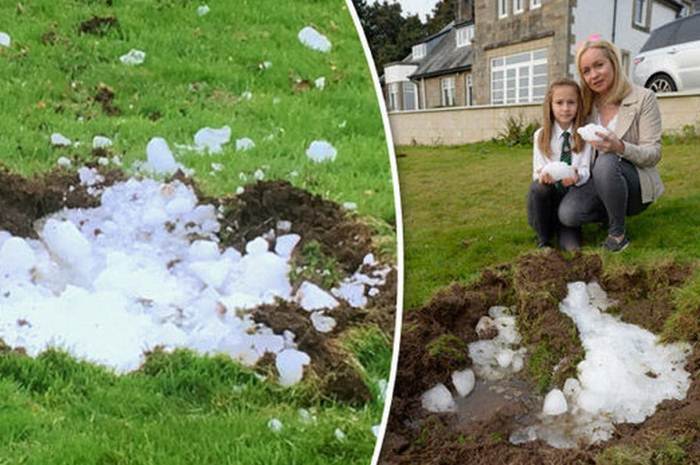 Local residents of the village of Busby, located in East Renfrewshire, witnessed a strange phenomenon that occurred on September 26, when a huge piece of ice fell from the sky in the afternoon, which fell into the garden next to the house, causing a loud explosion and leaving a large funnel in the ground after the fall.

The owners of the house told that they had breakfast when suddenly they heard a loud whistle, as if a missile was flying, then an explosion from which even the walls of the house trembled.

Running out into the shower, they saw a large pit about a meter and a half in diameter, and pieces of ice were scattered around.

“If it was Saturday or Sunday, the children could play football there, or my oldest daughter would play with our dog Harper, I do not even want to think what could happen in that case,” Lindsay said.

What caused the strange event is not exactly known. meteorologists suppose that a piece of ice could fall off an airliner flying over the village and advised the owners of the house to apply to the appropriate authorities to find out whether the routes of the aircraft are over their house.

Such cases in history are, but extremely rare. As specialists in the airspace of Great Britain have said, about 2.5 million flights of aircraft per year are carried out, and only 25 cases of falling pieces of ice have been recorded.

It should be noted that cases of falling large pieces of ice from the sky, were recorded before the invention of aircraft. There is no explanation for this phenomenon at the moment.