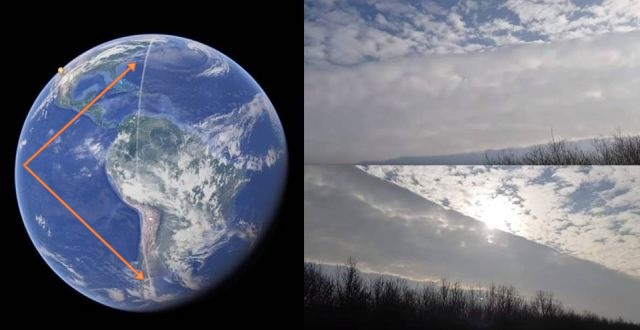 A mysterious line of thousands of kilometers stretching from the South to the North Pole is not only seen not only on satellite imagery on Google Earth and Google Maps, but has also been seen by eyewitnesses in the sky on earth.

There are many assumptions about the origin of this line. It was suggested that this is some event related to the renewal of our planet. There was a version that this line appeared during the processing of images from satellites in the course of incorrect imposition. But the fact is that this line is not a defect in pictures, it clearly has a physical structure.

The real existence of this unusual line is confirmed by observations from the earth. For example, eyewitnesses noticed a giant straight line of clouds hovering in the sky over the Netherlands. And eyewitnesses note that this line of clouds stretched from the edge to the edge of the horizon and looked like some kind of artificial formation. It differed in form and structure from surrounding ordinary clouds.