A strange epidemic of obsession with dancing

In 1374, strange mass insanity began to spread in Germany. It lasted about two hundred years and disappeared as suddenly as they appeared. People were captured by an irresistible passion for dancing. They gathered in droves and with wreaths in her hair whirled in the dance with wild cries, and outrageous views.

They frantically twitching in exhaustion and fell to the ground. Then he jumped to his feet, jumped, spun, and writhed with such force pounded his fists on the chest and hips, as if he wanted to expel from their bodies I will dwell in them devils. Foam protruding from mouths, uttering terrible cries. 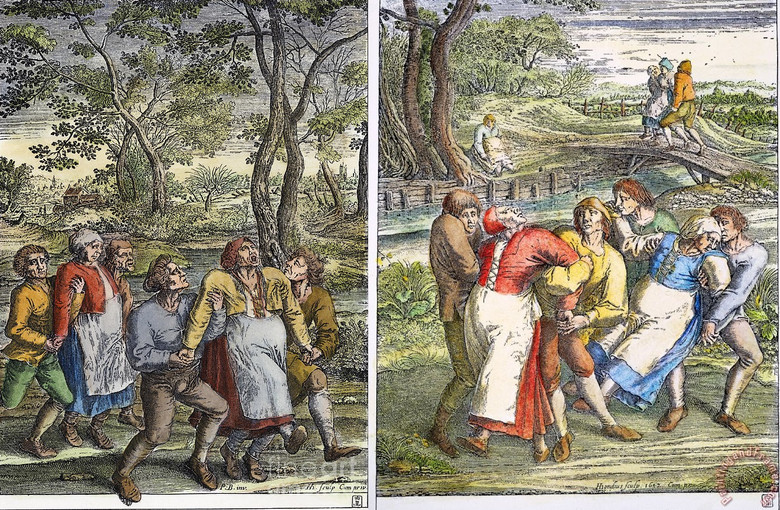 Many converging from all sides of the audience, staring, watching terrible performances. In different places madness took different forms.

Descriptions of the wild dances remained in the published memoirs are not doctors and not specialists and who happened to be at the scene awestruck people who were convinced that the human condition can bring only evil power and, therefore, the causes of madness dancers in devilish delusion.

About a deranged dancers told a lot of fantastic stories, and everyone wanted to see them with my own eyes. For this the peasants left their fields and craftsmen with their workshops. Women gave up housework to do, children left from their parents, servants from their masters.

Adventurers and con artists joined the raging, cleverly imitating their gestures and behavior. Traveling with the dancers, they could live easy and satisfying.

In July 1374 raging appeared in Aachen. A month later more than 500 people danced on the streets of Cologne. From Germany dance craze spread in the Belgian city. Mostly raging was poor.Like being under hypnosis, they told each other that soon the demons they dwell in the body of noble men and princes, and they shall destroy the hated of the clergy.

To tolerate violators of the public peace became impossible. From the Belgian cities raging removed for 10 or 11 weeks.

Dance fever the XIV century was not the first in Europe. In 1237 the German city of Erfurt passion for dancing and vagrancy suddenly swept over a hundred children who went to the nearby town of Arnstadt. All the way they danced and jumped, and when he reached the goal of his journey, exhausted fell to the ground. Here they took the parents, went in the footsteps of their offspring. As reported in the chronicle, many of the children soon died, and the survivors of the shake body remained until his death.

A lot of time was described a case that occurred Christmas eve in 1021, in the Church of the monastery located near the German city of Bernburg. Was service, which prevented the noise and the cry of the demoniac eighteen peasants. Finally the priest Ruprecht lost patience and cursed them, declaring that as a punishment for his indecent behavior, they will dance and scream for a whole year.

Said, as if this wish came true. The poor danced and could not stop. Lost power, they fell to the ground, and then, after resting and recovering, rose again and danced like a clockwork doll.

Only thanks to the intercession of two offered their compassionate bishops madmen were spared from further dances. They all fell into a sleep that lasted three days. Then four of them died. The rest are forever preserved limb tremor.

Bitten by a tarantula 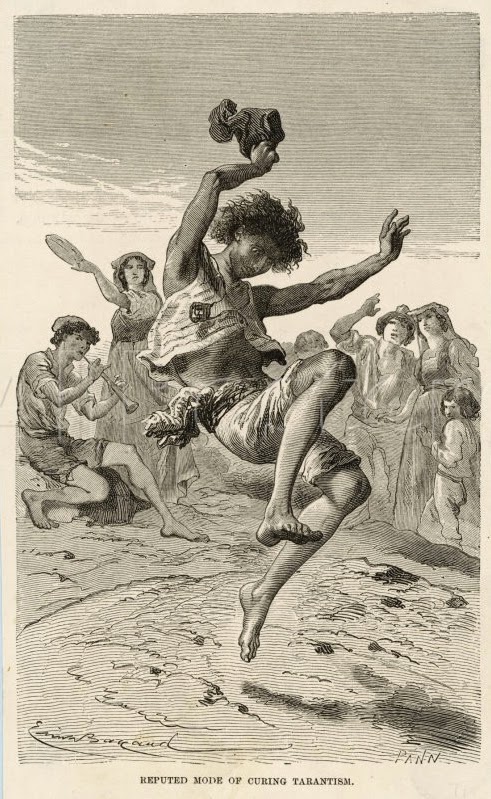 Italian doctor Nicola Perrotti (1430-1480) first described this unusual disease. He claims that people bitten by a tarantula, become discouraged, lose will and behaved as if they were deaf. They are constantly crying, I was in despair. They was tormented and sad for some unknown reason.

The other group of patients suddenly inflamed sexual passion, and they cast greedy eyes on women. Perrotti noticed something with which, apparently, has never faced the ancient Greeks and Romans.

Have bitten have a special sensitivity to music. At the first sounds of your favorite tunes, they were ecstatic, jumping with joyful shouting, dancing until, until enough forces, and then fall to the ground without signs of life.

The disease quickly spread through Italy and then to other European countries. Bitten by a tarantula knew that it is useless to go to the doctors, because their disease is incurable. They were preparing for imminent death. Some have lost the gift of speech and the majority of patients — all interest in life.

They do not care, but as soon as they heard the sound of flutes, the world has changed for them. It’s like they woke up after a long lethargy, his eyes wide opened, lethargy and stiffness disappeared. They came to life and started dancing, first slowly, then increasingly temperamental.

The number of patients grew with incredible speed. They did not doubt that the cause of suffering was the bite of a poisonous spider. No one believed in the possibility of a complete cure, but patients wanted at least to get rid of the feeling of despair and relief. Every year arranged a special healing festival. Cases gathered together and danced the Tarantella. The name of this dance, apparently, comes from the word tarantula.

Tarantella could dance at home and on the street and at the crossroads. Sometimes danced in festive clothes, sometimes naked. The orchestra was violinist and a woman with a tambourine. Often she sang heartrending song about the misguided love and imminent death, which will bring deliverance from earthly suffering.

If for some reason the music was silent, a happy mood and strength immediately left the dancers, and they, like a fly helplessly fell to the ground. Curious women came to watch the unusual spectacle. It was rumored, however, that such employment insecurity.

Spectators too risky. And they could get sick. They had the same ailment as that of bitten. Is explained by the fact that it excited a spirit poison, which they absorbed with my own eyes, watching the dancing.

Gradually it was discovered that the demoniac who considered themselves to be bitten by spiders, was not only a passion for dancing, but lots of quirks. They had a strange hatred for certain colors and equally difficult to explain addiction to others. Usually these features are associated with differences in temperament.

In most cases, patients loved the color red. Wore a red handkerchief. Was looking for dressed in the red of the audience and didn’t take her eyes off them. Some dancers prefer yellow. Those who prefer was green, took a branch with green leaves. There were those who were drawn to black.

Often it happened that dancer, noticing the subject, painted in his favorite color, he was excited, was furious and tried to get the coveted item, and if he was lucky the thing was in his hands, he began to caress, kiss and squeeze to her breast with tears in his eyes.

Another oddity, often manifest in crazy dancers, was a passion for the sea. They were not able without emotion to hear stories about sea voyages. Sometimes the mere mention of the sea led them in ecstasy.

Once on shore, they rushed into the waves. It often occurred that the Tarantella was dancing, standing waist-deep in water, and constantly poured water on his head and shoulders. If a strange disease was caused by evil eye, the craving for the sea and water is easy to explain. The victim of the evil eye trying to remove it, even if he’s not aware of it. Water (and primarily salt) has always been considered the strongest healing remedy for all types of damage.

The diversity of forms in which manifested a tarantism, often associated with difference in the character of patients. But his main reason was that the disease caused by different species of spiders, the venom of which has different properties.

But in 1785, the doctor of the Madrid hospital Manuel Iraneta-and-Hourai published the results of researches of action of bites of poisonous spiders on a human body. In several cases, the Spanish physician was observed in bitten (it was the soldiers who were in the field camp) restlessness and jerking, but when he asked whether they feel the desire to dance, patients took this question as a joke. They were not to dance.

It was also found that the attitude bitten to the different color things the bite of poisonous spiders not affected. No red, no green, no yellow items have brought them no special feelings. So about the true nature of the mysterious tarantula (and other weird dances) we can only guess.