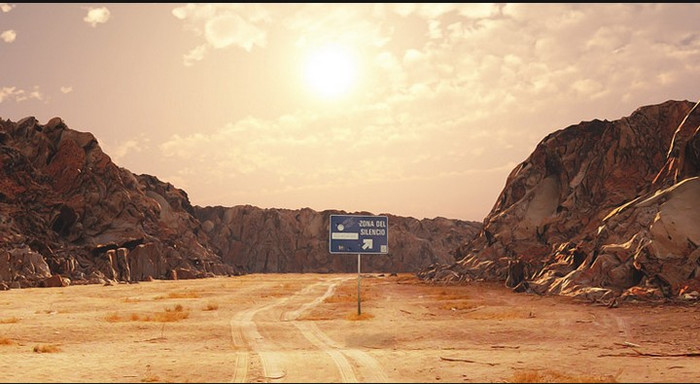 The zone of silence is a lifeless desert. From vegetation here only cacti, and from living things – snakes. In this vast territory, radio waves are lost, communication with the drivers disappears, and pilots on radars see only interference.

Paranormal phenomena in this area people began to notice more than a hundred years ago. Some witnesses described fire circles flying downward, as well as oblong objects in the heavens, emitting light.
In the 1970s, the Athena missile, which belonged to the Americans, suddenly deviated from its intended course and headed for the “silence zone”, then fell to the ground. After this case, scientists seriously interested in this abnormal territory.

Harry de la Peña was one of the first to try to investigate its inexplicable properties. The group, which worked under his leadership, found that communication by radio is simply impossible. As the researchers later explained, a magnetic force dominates in this area, which suppresses any radio signals.
Also, among recorded conversations with eyewitnesses, there are stories about encounters with unusual tall people with blond hair, who talked politely enough with them. Some of them were represented by employees of social services, others said that they came from above. They moved on streamlined cars with large wheels. They were interested in everyday events and came only for water. Witnesses describe them as very beautiful, but strangely dressed.

Sometimes there are stories about dwarfs, which the eyewitnesses initially took for children. Looking at the short stature of the people closer, they noticed that the guests were dressed in helmets and overalls.
In this lifeless place there was a frequent fall of meteorites. In the 1950s, a meteorite was found here, containing crystalline structures that were incredibly ancient. According to researchers, they are older than our solar system.

Scientists claim that some of the flickering lights seen in the zone of silence were the result of the US experiments on the creation of scout robots. In the area of ​​silence there is another unusual phenomenon: the magnetic mountain. Against this background, the first known photo of a UFO was made. The eyewitness managed to capture it before the device soared up and disappeared into the clouds.

Assumptions of scientists about the causes of the local anomalous phenomena there are many, but they all explain them only in part. Until the end to reveal the mystery of the appearance of glowing lights, meteorites, unknown high people and strange dwarfs has not yet been possible.