Above the Yellowstone flying UFO

American SUPERVOLCANO Yellowstone is famous for its unique nature and amazing geysers. In the natural Park of Yellowstone has installed several web cameras that broadcast the eruption of geysers online, this camera is aimed at a famous geyser Old faithful. And this camera the night of 6 August, recorded the appearance of a very large and bright UFO flying over the geyser. 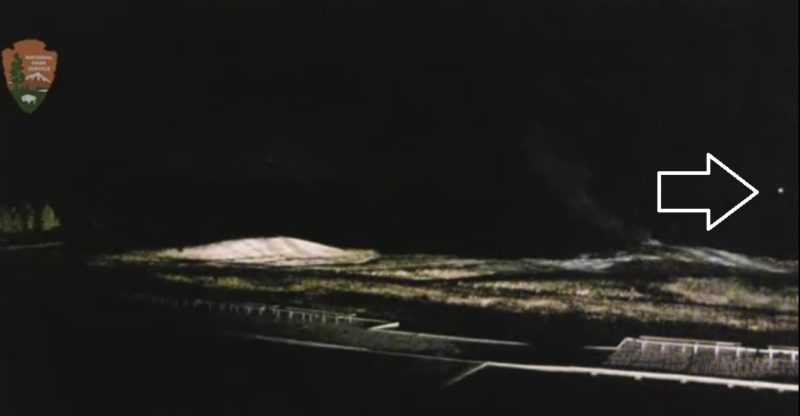 It is worth noting what happened all the night first, the object appeared in the distance a white point, a little will Shine, and then disappeared, but a moment later he appeared again at the same place and began to move directly toward the geyser.

As it approached it became brighter and brighter and then a huge glowing ball flew over the geyser Old campaigner, highlighting all the neighborhood with light. this powerful light source, allows to exclude the version with controlled unmanned vehicle. The UAV simply can not bear such a powerful energy sources, that would provide the power of light, not to mention the fact that the drones flying there is strictly prohibited, and certainly banned helicopter flights.

Old Faithful – geyser Yellowstone national Park. It is located on the hill, towering ten meters above the surrounding plain. And the altitude of its crater is about two meters. The old Campaigner has a height of from 30 to 50 meters. And each eruption lasts from fifteen minutes to five. The intervals between eruptions averaged one hour, but can vary from forty minutes to two hours. In the crater of the geyser pulled the probe and found that at a depth of 22 metres the water temperature reaches 118 degrees Celsius.

As you know, no one in their right mind would fly over the geyser shoots a jet of hot steam and water to a height of 50 meters. In any case, this event deserves our full attention.