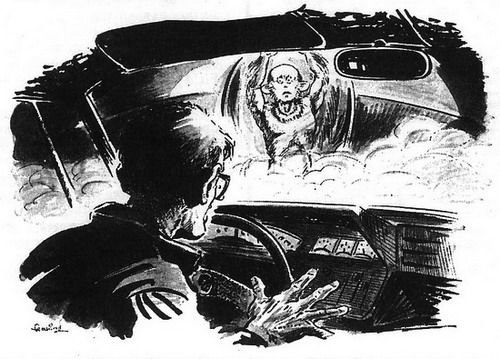 The story with the farmer William Bosak is unique in its kind, this is a very rare case when cryptozology and ufology are encountered.

This happened on December 2, 1974 at 22.30 near the dairy farm of 68-year-old William Bosack in the northwestern part of Polk County, Wisconsin, USA. The Bosak that evening was returning home in his car from a meeting of a local cooperative and about a mile from his farm saw something on the side of the road.

The object did not move and was very high, about 2.5-3 meters high. Its surface did not shine, but reflected the headlights aimed at it, and in shape the object looked like a shell of a mollusk or bell, but above it was a transparent part, as if made of glass. And there was a creature in it, which raised its hands high.

The Bosak describes this creature as similar to a human being, but according to descriptions it is not too like a person. The head of the creature was covered with hard short hair, but the area of ​​the face was bare, there was no beard either, the chin was hairless. The eyes of the creature were large and bulging, and the ears were very large and resembled the ears of a calf.

His body, at least the part that the Bosak saw, was also covered with brown wool, including hands. And it did not look like the creature was wearing fur clothes. There was nothing on the neck that looked like a collar or other signs that the hair was just a piece of clothing.

Other parts of the creature’s body could not be seen, and the bottom of the “ship” was enveloped in fog. Seeing all this, the farmer was very frightened, but the creature that looked at him, too, was probably frightened, as her facial expression showed.

When Bosak drove past the object, he slowed down the car very much to see the creature, but as soon as he saw it, he immediately gave over the gases and went to his house as soon as possible. At the same time, when he retired from the object, his head seemed to be weakened, their light became less bright. He also heard a strange sound engulfing his entire car, like the rubbing of tree branches.

Returning home, he tried to examine (through binoculars) that part of the road where the object was, but the fog hid the whole area. The next morning he returned to the same place, but there was nothing there.

The Bosak did not say anything to anyone about what he saw, even to his wife and children. But later I decided to tell and his story was even published in a local newspaper.

After that, two researchers of abnormal phenomena from APRO society came to him and they found out that the farmer Bosak from local people is known as an honest man and with a good reputation. He was never seen in the dissemination of fictions and such kind of jokes. Bosak himself even demanded that all non-believers check him on the lie detector and he would show that he did not write anything.

Later this case was included in many collections of paranormal stories under the names like “Yeti – pilot UFO” and the like. Bosak himself was sure that the creature he saw came from another dimension.

After a while, Bosak told reporters that after that incident, he was afraid to go out late at night and late. In addition, the story of that meeting was supplemented by Bosak with such detail that near the supposed meeting with the Yeti, local mittens found on the field a so-called circle on the fields.