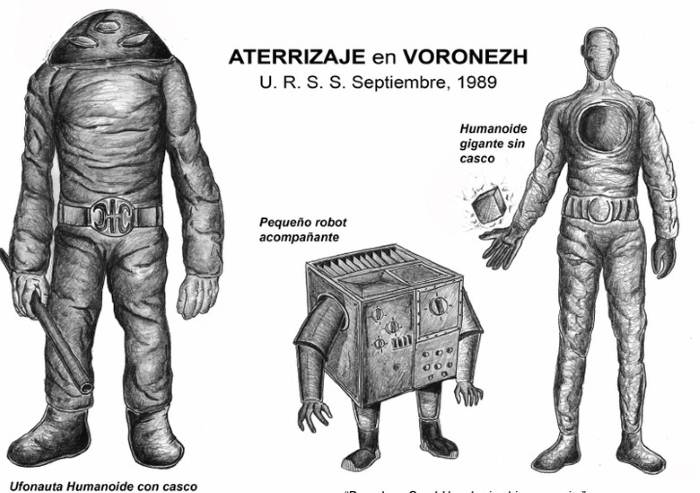 “Football with aliens,” the so-called small newspaper publication in the Voronezh newspaper “Kommun” on October 3, 1989, played the role of a detonator in the explosive spread of sensation, first in the regional and then on a world scale. She owes her appearance to Alexander Mosolov. He will begin a story about the events that have (in this now there is no doubt) included in the history of the study of a UFO called “The Voronezh Phenomenon”: ”

“It all started with the fact that on September 30, on the tenth day of my next vacation, I met with eyewitnesses of an unusual incident. And immediately it became clear that the remaining twenty days before going to work was clearly not enough to understand this event thoroughly.

Eyewitnesses were several children, pupils of 5-7th grades. Familiar with them helped the mother of one of their schoolmates.

The first narrator was Vasya Surin, a fifth-grader at the 82nd Voronezh school. On one of the September evenings, he and several comrades observed the landing of an unusual object in the form of a ball and the escape of strange creatures in the park near his house. One of them was tall, in silver overalls, three-eyed, – so the boy said, – the second was a “robot”, which “three-eyed” included by pressing some buttons on his chest.

Mother Vasya, who was present at our conversation, added that at first she did not believe her son, but a few days after he first talked about aliens, she and her neighbors saw an unusual object flying over their house and park, glowing with reddish light.

While talking, it was dark, but the guys agreed to go to the park and show “the very same” place where they afterwards happened to come to see the tracks left by the newcomers more than once.

We crossed the park along the asphalt path and stopped at the very edge of the park by a slightly inclined pyramidal poplar. According to the students, he was touched by a mysterious ball when landing. Three meters from the poplar trunk, the guys confidently showed: “Here, look!” It was already dark in the park and this area was only slightly illuminated by far-off lanterns. Leaning down, I could see the dent, as if some hemisphere had been pressed into the ground by a diameter of fifteen centimeters. Meters in one and a half found another similar trace. And the guys are already calling for another place: “Go, come here! Look what’s here with the grass! ”

About fifty meters from the poplar, there was a small lawn. I lean, touch the grass. In appearance and touch, it seems to be wrapped in something. “Here this balloon was flying very low, below the trees, I probably wanted to land, I even let out some kind of platform from below, as a support,” the boys continue the story.

I look at my watch: about nine in the evening, it’s somehow uncomfortable to detain the guys longer, although they are with their parents. We agree on a new meeting and say goodbye.

I walk from the park towards the twelve-storeyed house, which is about two hundred meters from the poplar, I try to analyze what I’ve heard. Vasya said that at the time of the appearance of the ball, a man of forty ran to this place. So, among them there must be residents of the “twelve-storey building”.

I go up to the entrance, near him there are six people: both children and adults. I asked if they saw anything unusual on the eve of the meeting. At once the kid of fourteen years: “I saw! Yesterday a ball, so elongated, flew from the side of the power plant. The buzz from him was strong, and the lights were flashing multicolored, there were a lot of them on it around the edges. ” A woman of about forty with a dog agrees to enter into a conversation: “A few days ago, there was some sort of running around in the park. There are basically kids playing. All of them were making noise like something that aliens are flying around. ”

We go with the boy back, towards the park. He shows his hand a trajectory: “Here he flew.”

– Flying past the house and disappearing behind the roofs.

I start to think that this is another case. “Yesterday” is the twenty-ninth of September. And there is no question of landing. Mistrust arises – is it not too often?

Thanking the boy, I go to the tram stop. On the move I try to comprehend information. All the guys tell confidently, emotionally. In the eyes they look directly, with anxiety and hope – will they understand? Eyes, as they say, a mirror of the soul. It happens that the children will play a game with someone, so they give themselves out-they laugh with laughter and wink. Here it is completely different.

In the next two days, we could not collect our group: weekends, and home phones only for two, and those were not at home. In order not to miss the time, he went to the editorial office of the “Commune” to Oleg Stolyarov, one of the journalists interested in the UFO problem. He asked him to give a note about what had happened and to indicate in the newspaper the address of our section, so that adult eyewitnesses responded. And, not counting on the imminent publication, I did not even write a text, I gave Oleg his drafts – those records that he did according to the stories of the guys.

The section managed to get together in the morning of the third of October. “Commune” exceeded all expectations – on the same day it appeared a note “Football with Aliens.” This material, which has now become “historical”, is worth it to bring it without abbreviations:

“Vasya Surin and Zhenya Blinov are studying: one at school No. 82, the other at school No. 33 on the left bank. They combined their incredible event. These guys and Yulia Sholokhov, and also a man of forty adults, who on September 27 witnessed the landing … a UFO in the park that is in the area of ​​the stopping platform “Mashmet”. But it was so.

The guys in the park played football. The day slipped towards evening. At half-past seven the boys saw a pink glow in the sky, and then a ball of red and burgundy color. A ball about 10 meters in diameter circled at an altitude of 12 meters from the ground, and it was evident how the grass under it had turned. Soon the ball flew away.

A few minutes later, the UFO returned, hovering over the park. By this time adults came running. A hatch opened at the bottom of the ball, a creature about three meters tall appeared in a silver overall and boots of bronze, with a disc on his chest and three eyes.

The creature, after examining the area, slammed the hatch, and the ball began to descend, hitting the poplar, which remained tilted.

The UFO landed. He threw back the hatch again. Two men came out, one, apparently, a robot. The alien said something, a glowing rectangle measuring 30×50 centimeters appeared on the ground, the alien again said something.

The glowing rectangle disappeared. The alien was digging into the robot’s chest, and he went, like a mechanical one.

At this time one of the boys screamed in fear. The stranger looked at him, and the boy froze, could not move. The eyes of the stranger were shining at the same time. All those who observed this phenomenon cried out. The ball and the creature disappeared.

About five minutes later the ball appeared again and “three-eyed”. On his side hung a “gun” – a tube half a meter long. A teenager was about sixteen years old. The stranger directed a “gun” at him and the guy disappeared. The alien entered the ball, and the one, gathering speed, flew away. Immediately appeared and disappeared teenager …

This story about the landing of a UFO recorded according to witnesses of several eyewitnesses. It can be added to it that the inhabitants of Putilina Street observed the appearance of the UFO not only once in the period of September 23-29. Such a surge of activity ufologists call a “flask”, which is usually associated with the landing of a UFO. “