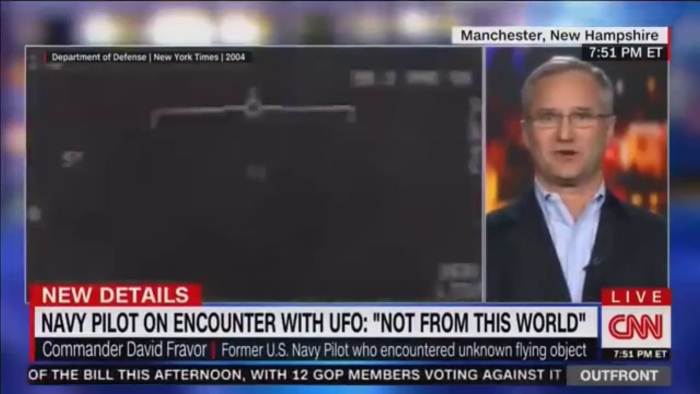 An American, 18 years old who served as a navy pilot, after retiring told about the bizarre flying object, which he saw in the sky over California. The Pentagon has preserved video footage of the flight, but the military does not give an exhaustive commentary on it.

In late 2017, retired pilot David Fravor (David Fravor) gave an interview to the American media, reporting on how on November 14, 2004, he observed a UFO. To tell about this earlier he could not because of the obligations binding him.

During the next training flight on the F / A-18 fighter over the California coast, Frevor and the co-pilot noticed a strange object that moved through the air at an incredible speed, dramatically changing the flight path. “[It was like] … a little white” Tick-to-So “, and it moved left, right, forward, backward – well, it’s just chaotic,” recalls the former pilot.

Frevor also said: “I’m not crazy, I was not drunk, and at that time had a solid flight experience.” According to him, the object did not leave a trail characteristic for the aircraft in the sky.

Evidence of an unusual meeting was provided by the duty officers on one of the Navy ships: they also spotted an object that appeared at an altitude of about 24 km. Military pilots tried to observe the unidentified device, but he quickly disappeared from sight. “I’ve never seen anything like it. Notice that this thing did not have wings, “adds Frevor. “I do not know what it is, but I’d like to fly it.”

However, there was no official investigation of the incident, or its results were hidden from the public.