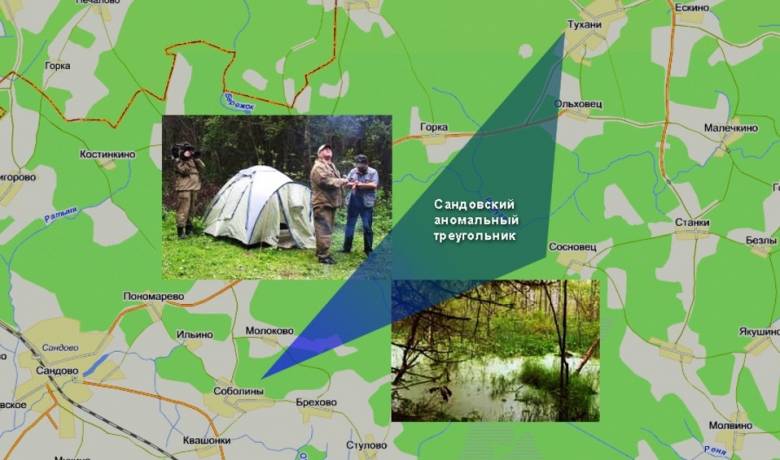 To the North of Tver between the villages Tohani, Sable and Sosnowiec is the so-called triangle Sandovsky, a well-known unpredictability of the local time.

According to the researcher Valentina anomaly Excavation, “when we entered the area, one of our friends found that his watch has stopped. Steel check and found that the watch stopped at the same time all members of the expedition.” However, the most striking thing revealed later.

When the group, which consisted of Valentine, was in Tohani, first learned the time at locals. And looking at his wrist watch, was astonished to find that they are absolutely correct, though never stopped. On them again it was Moscow time.

This phenomenon has told guests to Tohani geophysicists. Those interested and went to the anomalous zone with radiometric device “Pine”, which measures the radiation level and the presence of magnetic fields. However, once the experts came to a mysterious zone, the device was turned off, and with him it never could do.

Scientists believe that in this place there is a magnetic anomaly that affects the devices and people. However, it remains a mystery similar to the behavior of the clock. Let’s say, for some reason they can’t work in this area. But what mechanism causes them to return to normal time? Possible, the chronometers being accelerated on the boundary of the anomalous zone, but how this happens with such high precision? At the same time people do not notice.

Something similar is observed in Verkhovazhskaya district of the Arkhangelsk region. In the archives at 30 June 1912, States that the members of the scientific expedition, led by scientists at the Imperial Academy of Sciences Alexander Logicom, who has researched in the area of the magnetic field, all simultaneously failed.

Nowadays, the behaviour of instruments to measure time even more mysterious. After five hours, reviewed by a team of researchers in the area, quartz watches ran forward two minutes, mechanical fell behind on five minutes, and electronic, and had completely spoiled. Even the next day they are not revived a new battery. Center alleged anomalous zone is a small forest on the Bank of the Vaga, about 1.5 km from Cosewic.

In the village of morozovo, located 28 km from Verhovaja, a strange story happened for a long time. In the beginning of XX century surveyor Mack, who was instructed to break for villas forest land on the right squares, I give up with the job — compass shamelessly lied. After Mack left a few rides, intersecting at acute angles.

Later railway foreman, Nikolay Plotnikov with bussoli performed direct kilometer markings. When foresters cut down trees, it turned out that it bent to the right. Subsequent research has found that even a few miles from this place, the compass needle deviates from the real azimuth of 8°.

In the 90-ies of the last century, St. Petersburg’s Geophysics recorded in the vicinity Verhovaja geomagnetic anomaly. According to one hypothesis, the reason for its occurrence have become solid deposits of iron ore. Perhaps because of this, in 1944 there made an emergency landing five military aircraft. The pilots lost all orientation as they simultaneously broke down all navigational instruments. Fortunately, has done without victims.

According to experts of the Vologda aviation enterprise, any unusual phenomena over Verkhovazhskaya area was observed. However, on the flight maps of the anomalous zone is still marked.