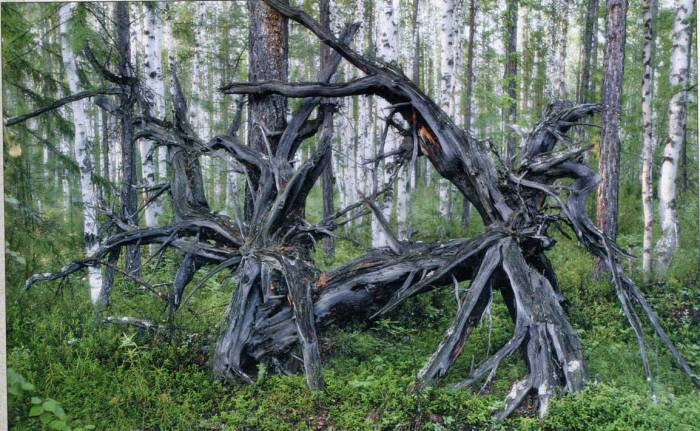 Is it possible to explain the passion of the people to anomalies, puzzles and mysteries? What makes from year to year to go to places that a bad name? Maybe it’s the desire to conquer your fears? And, maybe, the thirst for new adventures. To understand this, we decided to go on a virtual tour through the sinister places.

Who among us has not thought: “That would now disappear without a trace!” If the desire is really large, you can try your “happiness” on a Bloody swamp in the Novgorod region. The compass is better left at home – his assistance in the swamp are unlikely to need, still lost. The locals warn that on a Goddamn swamp, don’t go! Disappear without a trace.

The mountain of the dead in the Sverdlovsk region

Mansi call this place “holat Sahel”, which translates as “Mountain of the nine dead.” Everyone who goes to the mountain, composed of 9 people, waiting for the inevitable death.

Not once on the Mountain, killed a group of people. In most cases, their bodies were not discovered external injuries, but their faces fettered wild terror. It is on this mountain mysteriously killed Dyatlov.

To something similar hasn’t happened to you, you should not pass under the “Golden gate” – two huge stone arches, which is located on top of the rocks.

Medveditskaya mountain in the Volgograd region

Ball lightning and UFOs – that’s what Medveditskaya mountain rife. Some researchers argue that the zippers move along well-defined trajectories, namely the underground tunnels 20 meters in diameter with smooth and flat walls.

Local residents claim that through these tunnels in ancient times, bandits and Gypsies and rustlers deftly floated stolen goods. But supposedly in 1942 the tunnels were blown up. All wishing to go to the mountain the old-timers say, in 1990 I sat down to rest on the Stozhkov hay in a Fucking lair Medveditskaya mountain shepherd, and burned alive, but the clothes and the hay remained unharmed.

The bloody meadow in Krasnoyarsk region

It is believed that before the fall of the Tunguska meteorite is nothing supernatural in the clearing occurred. And then there were the tourists lost whole groups of animals, ran into the clearing, he certainly killed, and their corpses long decayed.

The devices record the incredible electromagnetic radiation, if there is high-voltage line, and the arrow of the compass and all points North, as expected, but right in the heart of the evil glade. According to witnesses who visited the clearing, they were pursued by irrational fear, but the body was paralyzed with unbearable pain.

Once through the village passed all known Babinov highway linking the European and Asian part of Russia. In the village the miners lived.

Perhaps for this reason it was necessary that a place like the alien – witnesses are constantly told about the mysterious glow. And anyway, the village was popular because in addition to the above companions, dwelt in him and evil spirits for a couple with evil spirits.

Today in the village. Depressing picture – the people like in one second disappeared, leaving the house things and unfinished business. Grotesque spectacle is a local cemetery where a huge number of gaping dug graves. Hunters and tourists bypassed the village side, and what the rest want.

If you really really want, except for mushrooms and berries, to see the forest something strange, malovisherskiy – the most that neither is a suitable place. According to the natives, settled in this forest a small group of hominoid (snow people), which the locals called affectionately “autosky”.

And everything went from Baba Avdotya, who lived in the village and wanted to marry. Only wife and no one took the time to do, because she was a weird person. Having lost the last hope, Avdotya waved a hand and went to the forest. And chose to stay, not piddly tent, and Nora. So she lived in a hole a year or two, and then disappeared. However, someone swore that they saw her with a wild man covered with hair. Supposedly from this Union there was “autosky” that inhabited the forest. But should we believe such slander?

Who does not know about the Loch Ness monster? And we and its of good enough. The Yakut lake labynkyr is home to the twin brother of the Scottish monster. His name is hell. Locals warn that the aggressive monster that spares neither animals nor people. On the shore did not stay too long – can go on land.