Bureisk Anomaly in Russia: Fall of a UFO, Meteorite or Landslide? 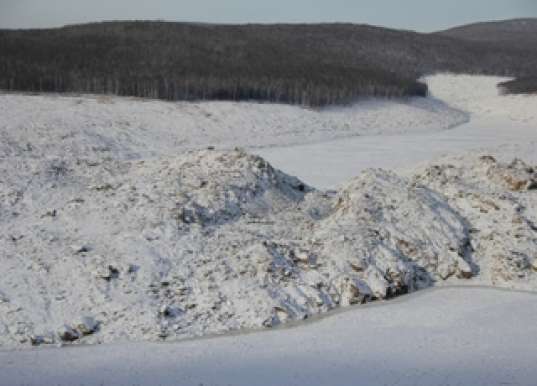 Giant meteorite, environmental disaster, the fall of a UFO or something else? In the Verkhnebureinsky district of the Khabarovsk Territory, the Bureya River was blocked. As a result, the course of the high-water tributary of the Amur was blocked by almost a kilometer in length and 40 meters in height.

What happened is not clear. When – exactly unknown. Today, only with these phrases can one describe what happened in the Khabarovsk Territory, where the full-flowing tributary of the Amur – the Bureya River – was suddenly completely blocked. A local hunter unexpectedly ran into a blockage a week ago, and when he returned home last Friday he uploaded a video to the Internet.

HUNTER: We are, along the way, not at the epicenter. But behind this mountain or a meteorite lies … All hills – naked, everything flew away. Scale roughly you see, yes? Won – Bureya, and this here – the mountains in the middle of the sea. I mean, exactly one week went by when we came when we discovered it. That formed the dam – from fells to fells. You see, there are no trees on the hills at all, just bare desert.

The man who shoots the neighborhood, stands on a huge array of land, solid rocks and fragments of trees – in fact, in the center of the former riverbed. But that told us the head of the Verkhnebureinsky district Alexei Maslov.

Maslov: It is on the Bureya River, which today feeds the Burea Hydroelectric Power Plant. What happened there, only God knows, but the scale of the incident, of course, is enormous. At a distance of 70 kilometers from the village of Chekunda – this is the village of the Verkhnebureinsky district – a certain situation occurred which caused the recharge of the main Bureya bed at a distance of 700 meters in length, up to 80 meters in height and up to 400 meters in width.

Immediately on the tapes there were reports of a certain meteorite that fell on the slopes of the hills. What should be a celestial body that can move at least 30 million tons of soil? We addressed this question to Dmitry Badyukov, head of the meteoritics laboratory at the Institute of Geochemistry of the Russian Academy of Sciences. The scientist expressed doubts about the cosmic causes of the phenomenon.

BADYUKOV: In principle, there should be a mass of at least 20 – 30 tons, penetrating our atmosphere, and on the approach somewhere, maybe several tons. Most likely, it is an environmental disaster. I think it’s just because of deforestation. When your forest is cut down, then everything falls down – landslides or mudslides that block the flow of the river.

Dmitry Badyukov bases his position on the absence of eyewitnesses to the fall of a meteorite, if that was the case. And its dimensions should be similar to the fact that almost 5 years ago flew to the Chelyabinsk region.

BADYUKOV: In Chelyabinsk, it was about 20 meters in size, flew into the atmosphere, but about 1-2 tons fell to the ground somewhere.

And then the trace from the meteorite and the roar of its explosion were noticed tens of kilometers around. In the walls of many houses and businesses windows were broken. Nearly 500 people were injured. And here what is called no rumor.

The area where the blockage arose is deserted, to the nearest villages – Chekundy and Talakana – approximately 70 kilometers. There are no lumberjack brigades there, and it is impossible to take round timber: there are no roads there either. It is also difficult to imagine the option of rafting down the Bureya: there is a huge Bureyskaya HPP downstream, and the power engineers are unlikely to approve the flow of logs in the direction of their dam. A person in no form, most likely, is not involved here, says Alexey Maslov.

MASLOV: I don’t come across such things every day, of course, but I’m 100% sure: it’s impossible to do with man-made things. There is no road there – 100 kilometers. Today, specialists – EMERCOM employees left, literally an hour ago they confirmed the information, took all the measurements. The bed of the Bureya is completely blocked. The enormous scale of excavation. That is, the blow was at an angle, not vertical. Of course, we do not exclude the fall of some technical means, but, as a rule, technical means still fall vertically. Here it was clear that the object came at a large angle, because it spread a mound along the bed of Bureya.

Seismic stations in the Far East have not recorded earthquakes in the area in recent days. There were also no launches of rockets from the Vostochny space center located relatively nearby. However, even a fallen waste level – an empty piece of iron, in fact, would hardly have done something like that.