Cases of contacts of children with aliens 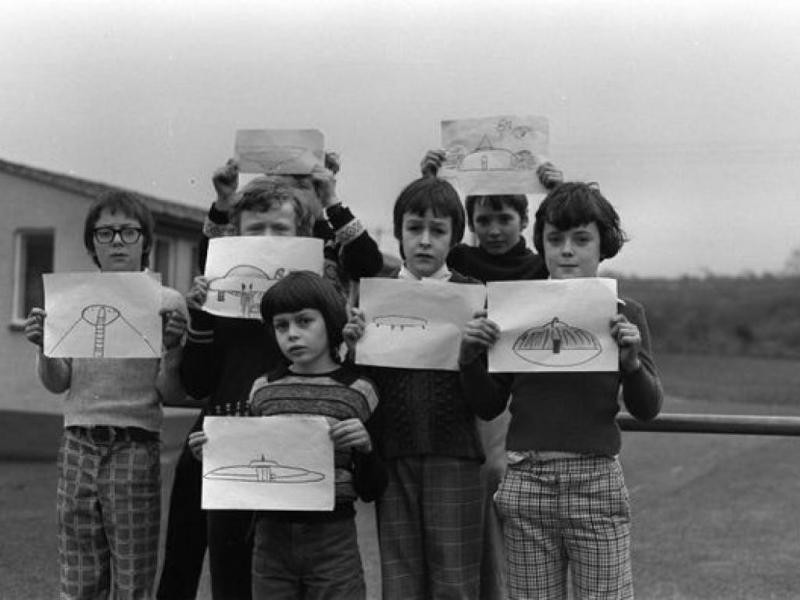 Witnesses to the emergence of UFOs often became children, but adults were inclined to view their stories as fantasies. However, the real cases of contacts of children with aliens, documented in the documents, changed the opinion of skeptics on this issue.

It all started in 1977, when school children from Broad Haven, while playing in the playground, noticed an unusual silvery object resembling a cigar. He had a dome in the center and for a long time hung over the ground, watching people, then abruptly gained speed and disappeared into the sky. Then the children immediately told about the incident to the teacher, but at first no one believed the words of the kids who painted the same UFO after the director’s request. A similar situation occurred with a girl living in the nearby town of Little Haven. She saw a landed ship on the farmer’s field, reminiscent of a plate next to which were creatures with sharp heads. The intense heat from this place made her even faint, but waking up, the witness of the event saw only a scorched piece of land where there were extraterrestrial guests.

The time has passed and UFO began to make visits to children’s camps, as evidenced by the story of an American boy, who was vacationing in the summer in Hillsborough. He lived with his comrades in a tent and woke up at night because of the mysterious conversation of strangers whose shadows were cast on its surface. Judging by the sounds, it was not a person’s speech, but belonged to intelligent beings who conduct a dialogue with each other. He immediately decided to wake up another peer to listen to the conversation together, after which the night guests left. The leaders did not believe the information, assuming that there were porcupines near the resting place, and then the child received a letter from his father, where a newspaper article was written about the numerous cases of the appearance of extraterrestrial objects in the state. Perhaps such events were related, but what they wanted to find humanoids in such a place remained a mystery.

At the end of the 1980s, near the Belarusian city of Rakov, a schoolboy gathered blueberries in the forest, but then he ran to the adults and reported an eerie 3-meter monster, covered with wool, which greatly frightened him. A large head without a neck and a nose was supplemented only by narrow eyes, and also the ears were not visible. Other guys also wanted to see this miracle, but quickly returned back, shouting that they would not go to such a terrible place anymore. The Moscow journalist came here to talk with the little witnesses, and later found out that they all accurately described an extraterrestrial creature whose roar resembled a bear. Then in the sky above his head appeared a black plate with yellow lights, from which the smoke was pouring.

The Perm children from Solnechnoye repeatedly met with mysterious newcomers, and also noticed a 2-meter-tall transparent humanoid near the fountain, sitting on a high spruce in a green cap. He nodded to the amazed children who noticed the oval face of the strange guest. the appearance of a silhouette with burning eyes near the body, after which they thought about the drawings of older children.Then 30 people stood on the veranda, but after the alien’s movement in their direction, they fell to the floor from a strong rush in tra. Also flying saucers over the camp often had an unusual glow, and the snow man loved to go and see to the kids. Especially all frightened poltergeist antics, pull out the drawer cabinets, bed lifting or swing the invisible hand swing.

An incomprehensible semi-transparent creature with red eyes, except for a strange black cap on the finger of the limb, used a device that fired sparks, after which the grass under the feet of the running teenagers burned with black fire. The stranger with dark hands and a yellow body entered the room and began to drive an incomprehensible pipe along the body of a sleeping boy, and then disappeared. The further fate of children confronted with such individuals remained unknown, although ufologists observed increased activity of UFOs in the region. Also, there are cases of kidnapping people, after which they completely erase memories, and there are failures in memory. This was told to the press by an American woman who, at the age of 10, was on a bike ride and suddenly saw an object of black, triangular in front of her. He did not have any holes, but during the flight the girl felt very cold, after which she felt sick. It turned out that during this time several hours of real life simply disappeared from view.

Paraguayan boy this year went to relatives in the neighboring house, but suddenly disappeared near the gate. After a long search, he got in touch with his parents and said that then he heard a noise over his head and a flash of light appeared before his eyes, and then nothing could be remembered. The child was found in a parking lot away from home, after which the doctors found no abnormalities in the body, and the investigation by the authorities did not work. Many researchers are sure that the aliens were abducted for their experiments, and then returned back.