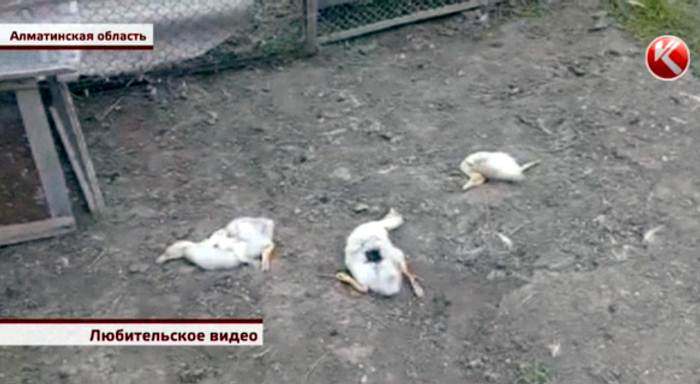 In the Almaty region, a dog of the Baskervilles appeared! An unhealthy creature strangles chickens, cuts rams and frightens calves. And, as the frightened villagers assure, the beast does not eat its prey, but only drinks blood. At first people decided that it was the stray dogs that were to blame. The dogs were immediately destroyed, but mysterious murders did not stop.

– Recently bought a goose, and that’s what happened. The dogs are already brutalized, people will soon be chewing.

Restful life in the village of Mynbayev ended three months ago. Strangled and exsanguinated geese and chickens have recently been found here almost every morning.

The villagers complain that they are tired of burying domestic animals that were victims of an unseen creature.

– For them, there is no barrier. These are dogs, I do not know, or they are as wild as if it were some sort of wolf breed. They have a muzzle and this is something. They do not eat what they ate, they undermined, but they just drink blood!

Today in the yard of the family of the Ozherelevs there were also sacrifices. Mysterious beast killed 30 hens.

– I thought wild, two yellow, one black. Through the fence, they threw up their heads. I took the armature, I wanted to beat it. Where the kvochki sat, the chickens were evaporated, and from there they took out the kvochek.

The villagers say: stray dogs have sown horror in the area, but they can not be called ordinary languages. The dogs, judging by the description, almost a supernatural origin! Red eyes and elongated muzzles. They also jump about three meters in height. True, there is no evidence. It has not yet been possible to photograph or shoot video photos of mystical animals.

“There are all such chickens, maybe some Chupacabra.”

The local vet only shrugs. Who made a panic in the village, Daulet Baysultanov does not know. I’m sure only that domestic animals are not killed by dogs. They do not have such a handwriting.

“Did you see the nature of the wounds?”

“I did not see it personally.” But our colleague, he saw. Did not devour. Just tore off the head and all. Ferrets, maybe.

– Is it unusual for dogs? Neither wild nor domestic?

The victim of the mysterious beast almost did not become cattle. The calf, who grazed near the village, also suffered, but nevertheless returned to the owner alive.

Local residents say that this abandoned kindergarten is a favorite place for stray animals. During the day they are here, and in the evenings and nights wander around the village. But today there have been shots here, and not a single dog is here anymore.

There are no schools in the whole village. Stray dogs in the village were destroyed, although by law this is prohibited. And who participated in the massacre, it is unclear. The veterinarian says – he is for humane treatment of animals. Local residents also say that they are not to blame. Be that as it may, after the destruction of the dogs, mysterious murders did not stop. Therefore, the villagers decided to arrange night duty to finally find out the truth.