Chupacabra kills rabbits in the Novosibirsk region of Russia 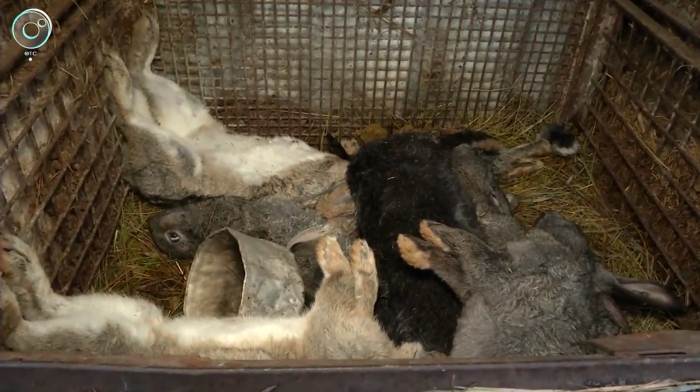 In the village of Kozikh of the Ordynsky district they are afraid to leave pets unattended. An unknown animal hunts rabbits, and in the morning the villagers find only dead carcasses. The forest monster has not been seen yet, but the unidentified monster is the main topic for conversation.

The debate over who is killing rabbits in the village has not subsided since October. Then an unknown animal crushed 15 pets in the yard of Galina Sotnik. In the cells, the net was torn, and the wooden walls gnawed through. Last Saturday the situation repeated in the next house.

“We are afraid of ducks and chickens.” You can not let them out, because you do not know where to expect danger from, “says Galina Sotnik, a resident of Kozikha village.

Leonid Korshikov lives in Kozich for more than 60 years. He said that there were no attacks on pets before. In total, the Chupacabra, as the local beast is called, killed more than 20 rabbits on three farmsteads. Leonid Georgievich is an experienced hunter, but he could not determine who owns traces in the snow.

– These are not foxes, they must be angular, and the corsac is much smaller. The wolf has a large trace, like a dog. But there were no wolves here for a long time. And this trace does not resemble anyone, I do not know what it is, – Leonid Korshikov is surprised.

The villagers deny the version of the neighbors-enemies. They say they live together. Yes, and go into the yard unnoticed someone else’s person is difficult, in every house watchdogs. It is believed that a small predator could not cope with a rabbit, and a big one would hardly leave a carcass. There is not a single bite on the bodies of dead rabbits. A feeling that the animal either died of fear, or someone broke his neck.

Now the carcass will be thrown out. There are their local residents do not take risks, but to conduct an examination of why rabbits died, expensive for money and time-consuming. To arrange ambushes is terrible. As the mysterious Chupacabra looks like, the villagers are only guessing. On the Internet there is unverified information that this night hunter drinks the blood of small animals, teeth like a wolf, and he moves like a kangaroo.