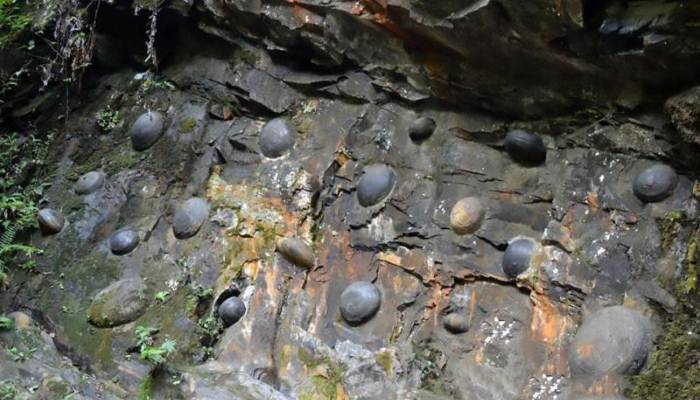 A small cliff in China, which every 30 years mysteriously “lays” ovoid stones, for a long time left scientists puzzled – until now. Residents of one of the villages in Guizhou Province in southwest China watch with amazement how these perfectly smooth eggs gradually grow on the rock and, eventually, fall to the ground.

But now geologists seem to have unraveled the secret of Chan D Ya, which means “egg-laying cliff”. They found that although the cliff formed 500 million years ago in the Cambrian period, a certain part of it consists of calcareous rocks. In their opinion, it is the time difference required for the destruction of each type of rock that leads to the appearance of “stone eggs”.

But this hypothesis still does not explain how the rounded stones appear or how the calcareous rock formation appeared in the geological region of 500 million years old. The dimensions of the cliff itself are only 20 meters in length and 6 meters in height.

Many residents of the nearby village take egg-shaped stones home, believing that they bring good luck. It is believed that this is why only 70 such formations were preserved – the rest were lost or stolen.