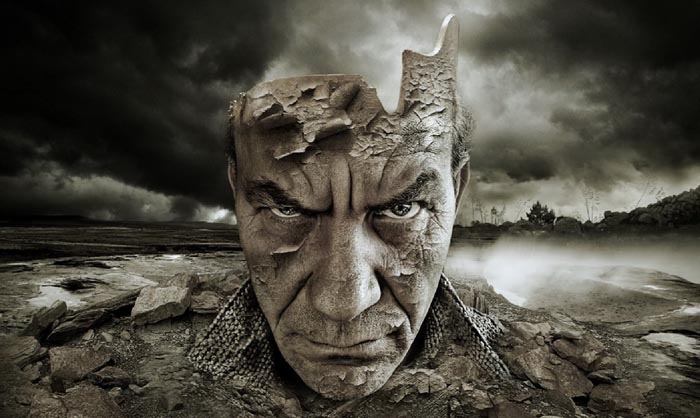 “When I was put in a hospital, I kept telling doctors that they were inadvertently putting their pills on me because my brain was dead. I lost the ability to taste and smell. I did not need food, communication, and generally did not feel the need to do anything. In the end, I began to wander around the cemetery, because I felt so close to death. ”

Ten years ago, Graham woke up and realized that he was dead.

He was in the grip of the so-called “Kotar syndrome” – a rare disease in which a person is sure that part of his body, or the whole body, has completely died.

In the case of Graham, this part was the brain. He was sure that he himself had been electrocuted. The fact is that the development of the Kotar syndrome was preceded by a severe depression, and Graham several times really tried to carry electric appliances with him to the bathroom to commit suicide.

Doctors tried to appeal to logic, but it did not help. Even agreeing that here he is sitting, talking, breathing (that is, living) he could not admit that his brain is alive. “All these conversations only annoyed me. I did not know how I could walk and talk to the dead brain. I just knew that my brain was dead, that’s all. ”

“It was a very unusual patient,” recalls Dr. Zeman. – He felt that he was in a limb – that is, stuck between life and death.

Nobody knows how much Kotar’s syndrome is really spread. In 1995, the results of a survey of 349 elderly patients of psychiatric clinics in Hong Kong with symptoms reminiscent of the symptoms of Kotar syndrome were published. However, most often these symptoms disappeared without a trace with the rapid and effective treatment of depression (which usually precedes the manifestation of symptoms of the Kotar syndrome). Therefore, in most scientific works, Cotard’s syndrome includes rare cases, such as Graham’s disease.

Some patients with Cotard’s syndrome died of hunger, being sure that they no longer need food. Others tried to get rid of the body with the help of poison, because they did not see another possibility to get rid of the situation of “walking dead”.

Graham was courted by a brother and a nurse who watched him eat. But existence did not constitute Graham any joy: “I did not want to meet people. Nothing gave me pleasure. Before the illness, I idolized my car. Now I did not even get close to her. All I wanted was to leave. ”

Even the cigarettes did not bring relief: “I lost the ability to perceive the smell and taste. There was no need, since I was dead. To speak, too, did not make sense. I even had no thoughts. Everything was meaningless. ”
Decreased metabolism

Zeman and Loreys examined Graham’s brain and found an explanation for his condition. With the help of positron emission tomography, they studied the metabolic processes in the brain of the patient and came to a striking conclusion: the exchange activity in the vast frontal and parietal regions was so low that it approached the vegetative state.

Some of these areas form a kind of “default” system, which forms the basis of our self-awareness. This system is responsible for the ability to reproduce the past in memory, to shape the sensations of one’s self and to realize responsibility for one’s own actions.

“Graham’s brain functioned in much the same way as those under the influence of anesthesia or sleeping. I’ve never seen anything like this before in people who were conscious and could move independently. ” – explained Loreys.

Zeman suggested that the functioning of Graham’s brain could be affected by antidepressants, which he took in large numbers.

Thanks to psychotherapy and medical treatment, Graham gradually recovered. Now he can do without outside help. The ability to enjoy life has returned.

“I can not call myself completely healthy, but I feel much better. I no longer think that my brain is dead. And I like to be alive. “