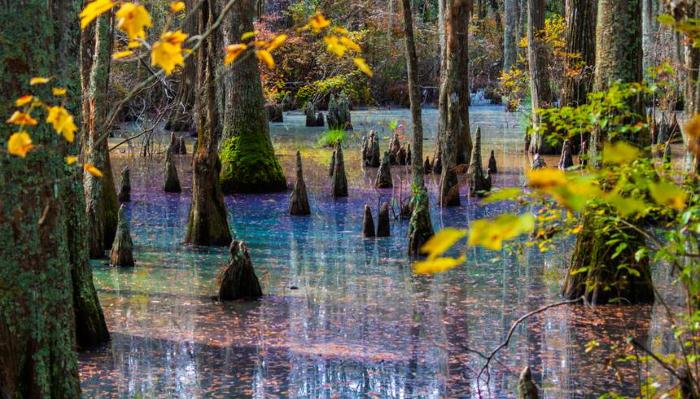 In early November, Ross Brenten, a photographer from Virginia, decided to take his girlfriend and go for a walk in the swamp – the swamp of First Landing State Park State Park. There was no terrible Baskervilles dog in this swamp, but instead a couple saw a rainbow. Only the rainbow was not in the sky, but right in the swamp.

The photos reached the United States and the social networks only three weeks after the manifestation, but the discussion was no less heated. Opinions about the situation undressed. Some connoisseurs have unsubscribed that all this is very beautiful, and residents of the county of Devonshire even expressed a desire to also go in the spring to see local sights, for example, what travel agencies give out for Baskerville Hall.

However, the opinion of this public is not considered, because if they see Nibiru in the sky or a cloud of amphibious capsules fired from a two-kilometer UFO, they will also think only in the categories “beautiful” or “ugly”. The second part is local and not even local environmentalists, who suspect that a new reflective element, like gasoline, has appeared in the swamp. Or that the local algae learned to produce clean diesel.

However, the most sensible part of the public writes that something has changed in the atmosphere. There are no oil pools in the swamp, and even if oil is poured in the ocean, a rainbow on the sea herons does not appear later. But what could change, change in the atmosphere, that it began to refract light differently? No one has ever seen such rainbows in First Landing State Park, or anywhere else. Perhaps someone specializing in the topic of readers will help us all clarify the event, since the editorial board does not have a clear explanation for this strange phenomenon.