Dolphin spotted in a river 20 kilometers from the sea in Cambridgeshire, UK 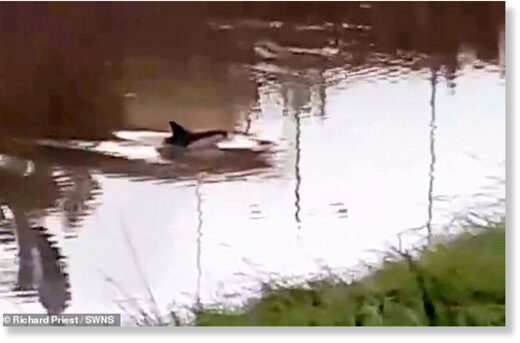 A couple walking along a local river was shocked to see a dolphin swimming in the water – 20 km from the sea.

Richard Priest, 32, and his wife Serena, 41, were walking along the banks of the River Nene in their hometown of Visbech, Cambridgeshire, when they spotted a fin in the water.

Filmed by Mr. Priest on 23 August, a dolphin can be seen gliding across the river.

“I was going for a walk with my wife and, by a happy coincidence, I saw a big ripple on the river, and then the dolphin jumped out of the water.

I thought it was strange and the dolphin must have gotten lost because I have never seen a dolphin in the river, so I reported this to the Marines Foundation, who was very surprised. ”

The Sea Watch Foundation observes cetaceans in the waters of Britain and Ireland and after watching a video by Mr. Priest confirmed that it is indeed a common dolphin.

The Sea Watch Foundation said it was very unusual for this dolphin to climb this far upriver and outside of its normal habitat.

They feed on fish found in fairly deep waters, although they hunt mackerel or herring.

Also common dolphins are rare in this region as they enter the North Sea, but not very often.