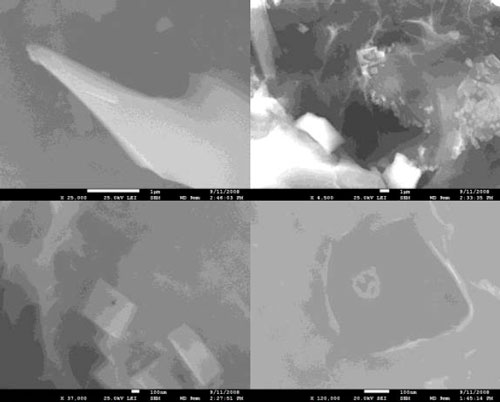 An unexplained story occurred in 2008 in the United States. The man, hiding under the pseudonym John Smith, in the toe of his left foot discovered a foreign object.

Smith said that on the evening of February 28, he was at home alone and saw raccoons through the window in his backyard. The man went out into the street and watched the animals for a while. Then he went back to the house and went to bed. The next day Smith felt a burning pain in his leg and turned to the doctor who conducted the examination of the patient. An X-ray shot showed that under the phalanx of the finger on the left foot is a foreign object measuring about 3 mm, resembling a bent piece of wire.

The object was surgically removed from under the skin of the patient, and he immediately broke up into 12 minute fragments. Then, the fragments of the object were thoroughly studied using high-precision medical equipment and powerful electron microscopes. The findings of this study astounded the experts.
It turned out that the object was a high-tech device made of an iron-iron alloy with impregnations of magnesium, phosphorus, aluminum, sodium, sulfur and calcium. Such an alloy in nature is found only in space, which led researchers to conclusions about the extraterrestrial origin of this object. In addition, the implant had inclusions of non-metallic material of unusual shape, suggesting its artificial origin.

Prior to removal from the body, the devices recorded radio signals that emitted the implant, therefore, it was a nanotechnology device placed in Smith for a specific purpose. It was impossible to determine the functions of the device. Presumably, a foreign object was implanted in Smith’s body in order to monitor his physiological state and influence or control over his consciousness.