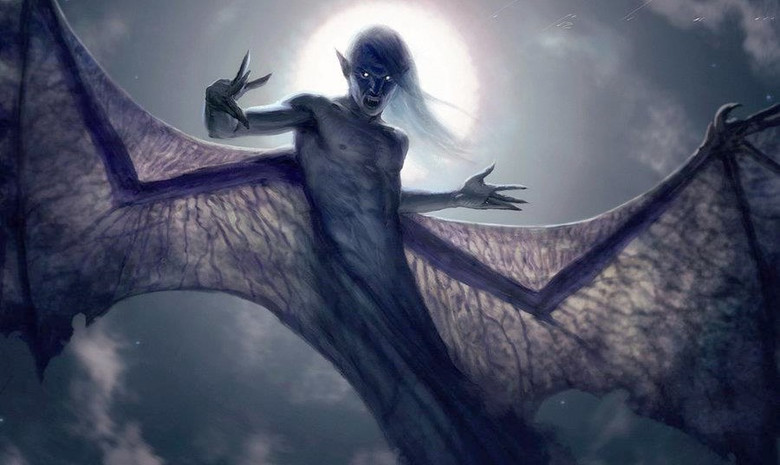 Philippines — an island nation inhabited by many peoples. Despite the centuries of Islamic influence and the Christian missionary, Filipinos in addition to believing in dragons and giants believe in their own demonic creatures. Especially popular myths about a beast called the aswang.

I must say that the Philippine demon-the aswang is a vampire, and a werewolf, and a witch in one form. Usually the aswang, or tick-tick, is a young woman, but she knows the secret of making a magic ointment that turns her into a big black bird.

Werewolf-bird with a distinctive cry of “I” enters into the dwelling of the victim, then long and strong hollow tongue pierces a vein in the neck of the unfortunate and drink his blood. Say the sound “tik-tik” is heard when a long tongue aswang sucks the blood of the doomed.

Victims are usually sick people, pregnant women and children. After drinking blood, the aswang is itself reminiscent of a pregnant woman. After returning home, she feeds someone else’s blood of their children. Also for these creatures is found one more sin for the liver and heart they kidnap little children and even unborn babies. The sharp end of the language of the shifter touches the navel of the mother, and sucks the blood of the fetus.

In addition, the aswang does not shrink from the corpse-eating. She can steal a dead body, replacing it with a trunk of banana tree, cut in the form of the deceased. Malicious tick-tick can turn a man into a beast, and beast — man. Other times, she seduces men with her beauty and lures them into a secret place, where it binds with vines and eats them alive.

There is another kind of aswang — manananggal that looks like an ugly old woman who is able to fly due to the special glands secreting a buttery substance. One Englishman described his unexpected meeting with mananangal in a quiet moonlit night:

“Suddenly I noticed a dark spot, which gradually became more and more. What I saw next I will never forget! It was an old woman with huge wings like a bat and she flew! She had flaming red eyes, long curved arms and sharp nails. Her skin was dark as the night itself. It was the worst thing I ever met!”

Fortunately, the Englishman managed to collect the remnants of courage, tightly closed the Windows and hid. The beast flew around the house and disappeared. But the frightened witness until dawn couldn’t sleep a wink.

Particularly demonic and are the most active aswany in the belly which lives a black hen. If the witch still catch and force to vomit the chicken into the fire, her supernatural abilities disappear and she becomes a normal woman.

Both young and old aswang have one thing in common: their demonic activity is manifested only at night. If the sun touches the magic ointment its rays, it instantly evaporates. And if the witch did not have time to reach the destination, it might just fall off to the ground. Also assange dangerous to be caught in the rain, because it flows can wash away the magical grease.

To protect yourself from terrible aswang, the Filipino has invented many remedies, among which the traditional — salt, silver, garlic, ash, raw rice. Especially dangerous for the evil spirits, according to legends, is the male sperm: it may cause the creature inflammation. They also say that these beings are afraid of the smell of burnt rubber.

Incredible story alive in the legends of the people called isneg. Young beauty got married at the age of 16, but a year later her husband died. After that, it had three times married, and all of her spouses have faded over the years. Fourth husband, became suspicious, one night pretended to be asleep, holding the knife ready.
Shortly after midnight, he felt that this was the creature that clung to his neck and trying to suck the blood. He plunged a knife into a vampire — and I heard a scream of terror and flapping of wings. The next day his wife was found near the home with a stab wound in the chest.

Most Filipinos are so confident about the existence of tick-tick, that their superstition had once decided to use the Americans. In the 1950-ies, during the presidency of the Philippine leader Magsaysay rebellion broke out. The US government supported Magsaysay, and American advisers convinced him to create a unit of psychological warfare. One of the activities of this subdivision, the memoirs of General E. E Lansdale, was an attempt to convince the rebel forces-Haq to leave the position under threat of attack aswang.

The operation began with the distribution of hearing about the appearance of a vampire. A few days later the division captured one of the rebels. The military killed him, after all the blood and making two point-like wounds on the neck, was left on the road near the hill where he was discovered by the comrades-in-arms. The next day all troops hack retreated.

When they left, the local farmers, too, were afraid that will fall victim to the bloodsucker, and began to wear a garlic necklace. Some families fled from the hazard area and their abandoned land, the government got their hands on. Despite the panic among civilians, the military recognized the psychological effectiveness of this method, the result of which has deprived the rebels of the support of the local population.

Filipinos today still believe in your demons, bloodsuckers, although the European vampires, they are much more popular — especially those that “made” the Western film industry.