Filled up Hawaii with snow 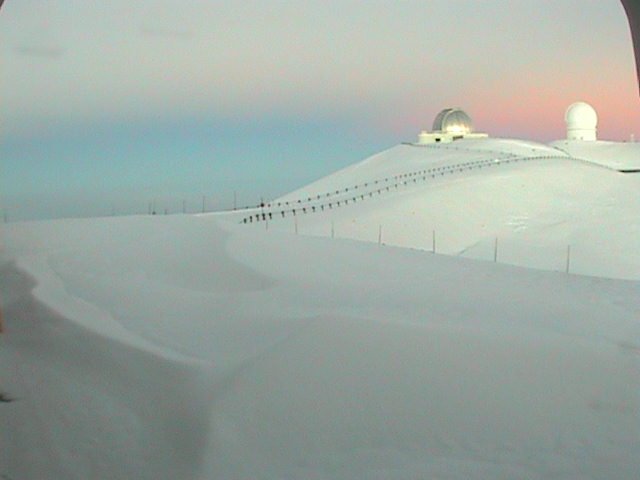 More than 30 cm of snow can drop out at the highest mountain tops of the Hawaiian Islands which are already brought since Thursday more than on 60 cm the local weather service reports.

Tops of Mauna Loa and Mauna Kea on the Big island (Big Island) remain in the power of winter. The blizzard and the howling wind many times reduce visibility. Heavy rains, thunder-storms and floods have fallen upon other part of the island. “Powerful heavy rains and thunder-storms can cause promptly flooding banks streams, as has led to floods” — it is said in the message of a weather service.

Despite a rain, temperature on other part of the Hawaiian Islands will be typically moderate. According to Gismeteo’s forecast, in Honolulu on Monday and on Tuesday about +23 °C are expected.

Snow at tops of the Hawaiian mountains in cold months isn’t a rarity as their height makes about 4200 meters. Mauna Loa and her sister of Mauna Kea are volcanoes. Mauna Kea where the subarctic climate prevails — the highest point of the state.

“While there are clouds, rather dense for formation of ice crystals, and rather low temperature on heights, we still will see snowfall — the meteorologist Mathew Foster from a weather service in Honolulu has told. — During this cold season probably expects us from three prior to five snow events. In their some years can be more, in some it is less.

The only area in Hawaii where snow drops out with some regularity, is a volcano of Haleakal on the island of Maui. There, at the height about 3000 m, he is approximately time in five years”.

#Snow in #Hawaii. It’s happening now and it’s not that weird. https://t.co/iG79ahXflr pic.twitter.com/64FynERmg6

According to the message of a weather service, for all history of observations the lowest temperature in Hawaii was on May 17, 1979 to Mauna Kea and made −11,1 degree.