Flight of UFO was observed over Florida 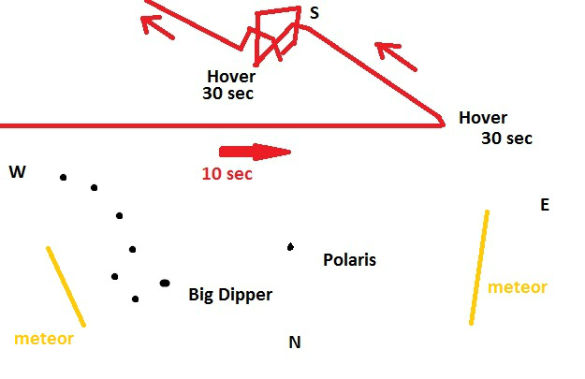 In Ormond off the coast of Florida, two eyewitnesses reported that they saw a bright object flying “zigzag” over the sky at high speed. Observation happened last night, when they looked at the stars from their yard. The husband says that he is a military man and served for 14 years in the US Air Force, but he has never seen anything like it.

“My wife and I were in the street, in the backyard, looking at the stars, because the sky was unusually clear.” We watched the stars and constellations for 5 minutes when a moving object suddenly appeared in the sky.

The object appeared suddenly from the west, headed east over the ocean, it flew extremely fast and at extremely high altitude, the color was bright white, the object flew through the sky in less than ten seconds.

Then he stopped and stood motionless for a few seconds, and then flew southwest into the interior of the country, making erratic zigzag movements, then abruptly stopped and remained motionless for a while. Its speed was incredible. Then the object flew to the southwest until it was lost in the light of the city lights of Daytona Beach.

I served for 14 years in the air force and saw how all types of military aircraft fly and I can confidently state that it was not an airplane or a satellite. I have never seen anything flying so fast and so incredibly changing the direction of the flight, not to mention the full stops in one place during the flight.

I’m actually a very rational person. A highly qualified and experienced observer. I saw the ISS, the space shuttle, fighter planes, modern aircraft and observed numerous satellites in the sky for many years, but I have never seen anything like it, “the eyewitness said.