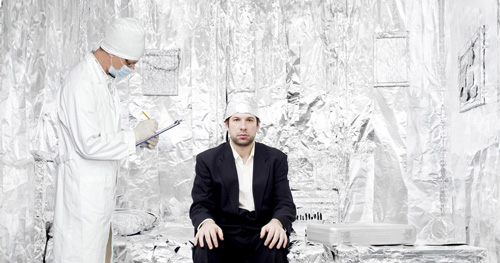 Homo sapiens is endowed with a harmonious set of feelings to adequately perceive and explore the surrounding world, and with skillful hands to transform reality around itself. However, sometimes nature invades this debugged interface, and then strange things happen …

Let the eye have an imperfect structure, let its retina is inadvertently turned out by photosensitive cells not to light, but quite the reverse. Disadvantages of this design, borrowed from the primitive chordate Cambrian period, compensates the brain, which has learned to bring to mind a poor-quality picture for millions of years before the advent of computer photo editors. As is known, the eye focuses the resulting image on the retina in an inverted form, but the brain also copes, as a result of which we invariably get a picture of the correct orientation. An experience is known in which subjects wear glasses with flip-up lenses. After several days of forced inconvenience, the brain again put the image as it should. At the next stage of the experiment, the glasses were taken off, and the subjects were again tortured with an inverted picture. And again, not for long, exactly the time that the brain needed for adaptation. But this is so relatively easy, only when the brain itself does not experience problems.

However, in medicine, a disorder is known, called the illusion of the tilt of space (Room tilt illusion). The essence of it is that the patient suddenly begins to see the world around him from a certain angle. The angle can be small – about 20 degrees, and can reach up to 90. Sometimes the image simply flips around the horizontal axis, in other words, the top changes places with the bottom. Finally, the rarest option is the perception of the image in the mirror image. Such a scary phenomenon for a person can last from several minutes to several hours. Physicians usually associate this syndrome with various lesions of the cerebral column or occipital parietal region, as well as with migraines. Regardless of the specific reason, it is obviously about the conflict of visual and vestibular information entering the brain. It is not by chance that the illusion of the tilt of space is usually accompanied by dizziness and disruption of spatial orientation. In other words, the brain, misinterpreting the vestibular information, tries to adjust the visual perception to these false data.

By the way, one of the most common manifestations of the conflict of visual and vestibular data is seen in banal motion sickness in the back seat of the car. If the vision is riveted to a fixed point in the salon or to the page of the book, and the vestibular sensors report complex movements in space – this becomes one of the reasons associated with motion sickness.

The illusion of an inclined space should not be confused with the effect that is familiar to cosmonauts who participated in flights on spacecraft or at least trained in an atmosphere of artificial weightlessness on board an aircraft. In the transition from overload to weightlessness, even these healthy and trained people have an unpleasant feeling of hanging upside down, although there is no bottom in the sense of the direction of terrestrial gravity in weightlessness. The difference is that a person experiencing a sense of inverted vision, adequately perceives the positioning of his own body – he does not feel that he is looking at the world, standing on his head. Such an unusual separation of the body from the surrounding space in something similar to this illusion with autoscopic hallucinations, during which a man watches his double in front of him. In the variant of the heautoscopic hallucination, he also feels in the double the presence of his own “I”.

Migraine, which has already been mentioned above, is a disease not fully understood, capable of causing other unusual visions. When a person is suffering from migraine, severe headaches are suffered, which are sometimes accompanied by hallucinations like Alice’s syndrome in Wonderland: this fairy girl is known to have collided at the author’s will with spatiotemporal paradoxes. With the manifestation of the syndrome, objects and distances change their real dimensions: the remote from the TV can seem gigantic, the TV itself is tiny, and the walls and ceilings are far away. Hypertrophic dimensions sometimes assume in these visions and parts of the body the most hallucinating – for example, fingers and limbs stretch to incredible sizes. Also, the sense of time is usually lost. Such changes, of course, suggest the effect on the psyche of certain drugs, but Alice’s syndrome was recorded in people who are not related to drugs.
Brain disorders sometimes lead not only to impairment of visual perception, but also to “autonomization” of individual parts of the body, as occurs in cases of manifestation of the syndrome of someone else’s hand. This disorder often occurs in people who underwent surgery for the surgical separation of the brain hemispheres – this measure is used to relieve the patient of suffering in severe forms of epilepsy. The syndrome is also observed in other brain lesions, and depending on the localization of the lesion, its manifestations have their own specifics. The essence of the phenomenon is that the person, continuing to feel the hand part of his body, loses control over it. If, for example, this effect is caused by problems in the frontal region of the brain, then the hand can grasp the object and hold it, and the owner of the hand is unable to unclench the fingers by strong-willed effort-they have to help with the other hand. The defeat of the occipital parietal region, on the contrary, causes the unruly hand to avoid contact with nearby objects – it will always pull the wrist back. The third option – one obedient hand does something according to the will of the master, the other starts to perform some completely unrelated to this task, or even interfere with the second hand. A hand that does not listen to its master, as an interesting and paradoxical image, has entered modern culture – references to this psychoneurological disorder can be seen in both Stanley Kubrick’s old film about Dr. Strangelove and the modern near-medical telesag about Dr. House.

All these strange sensations, illusions and hallucinations associated with the perception of time and space, arise in some people at a certain stage of life, are the result of acquired diseases or disorders and last, as a rule, for a short period of time. There are, however, a small number of people on Earth with whom nature joked especially cruelly. Their ailment associated with a sensitivity defect has been living with them since birth and is especially dangerous in those years when a person is not yet able to clearly and uninterruptedly control his actions. It’s about congenital insensitivity to pain. Pain, as you know, though it gives us the most unpleasant sensations, but it is the most important signaling device that informs the body of the imminent danger. Without these signals, an adult, especially a child, can imperceptibly inflict a serious wound on himself, get a severe bruise without even thinking about his traumatic consequences, or, for example, drinking hot water without feeling the usual burning pain in such cases.

The cause of such anomalies is genetic disorders. The mechanism of pain transmission is associated with the passage of sodium ions through ionotropic receptors located in the cell membrane, or the so-called sodium channels. Sodium channels are formed by a special kind of protein and have two states – open and closed. Penetrating the membrane inside the channel, the sodium ion changes the distribution of electrical charge between the external and internal environment, which serves as the basis for the formation of a nerve impulse, which is ultimately processed by the brain. If the channel is not working properly and it is too easy to open, the person will constantly feel pain; if the channel is insensitive to the corresponding stimuli and will not open, the pain signal can not occur and the brain will remain unaware.

One of the heroes of this drama is the gene SCN9A, which encodes the protein Nav1.7, and the latter forms sodium channels in the cell membranes. In particular, the mutation of this particular gene is the cause of a rare angiotrophoneurosis – erythromelalgia. People suffering from this disease can hardly wear shoes, since heat and light pressure are interpreted by the body as irritating, and the skin of the legs turns red and feels burning pain. A very unusual effect of one of the mutations of SCN9A was observed a few years ago by a group of researchers led by Professor Jeffrey Woods (Cambridge). Their attention was drawn to the story of a boy who lived in northern Pakistan and amused spectators with bloodthirsty tricks. He with a smile on his face pierced his hand with a knife, walked on hot coals and glasses. Unlike professional illusionists, the boy wore terrible traces of these ideas in the form of wounds and cuts, but they did not seem to give the owner any trouble. While the scientists were trying to get to the unique, the guy died deciding to demonstrate to his peers that he could jump off the roof of a tall house and remain unscathed.

In view of the tragic death of the main object of scientific interest, the British sought out the boy’s relatives and found that they also almost completely did not feel pain. A bright evidence of an inherited disorder was the cheeks and lips that had been bitten in childhood. After a genetic study, the scientists came to the conclusion that they are dealing with a mutation SCN9A. And what is surprising – in this case the altered gene did not cause any specific disorder of the type of erythromelalgia, but simply turned off all the sodium channels responsible for the pain sensations. In this case, members of the family of the deceased Pakistani could easily distinguish, for example, warm and cold food, because the sensation of temperature, not associated with pain, is transmitted by other receptors. But as soon as the heat became burning, the pain signals did not pass – the receptors did not respond.

It is very difficult for a person’s life and his interaction with the outside world to have another genetic disorder, the Ehlers-Danlos syndrome. The art of contortionists – circus performers demonstrating the flexibility of the joints that is unattainable for the common man – causes confusion and admiration. How can an adult man bend back, clasping his legs, or laying himself whole in a tiny glass box? Of course, increased elasticity of ligaments is achieved by persistent training, and although the majority of contortionists from childhood had a predisposition to superflexibility, it is not always about some pathological properties of the body. However, the Ehlers-Danlos syndrome since birth “gives” individuals weak and loose ligaments, their hyper-mobile joints are prone to dislocations, subluxations and sprains. It’s all about genetic mutations that lead to inadequate production of collagen in the body – the most common protein in the mammal. This fibrous protein forms the basis of connective tissue in the body, including bones, cartilage, tendons, vessel walls, and skin. Thus, a person suffering from Ehlers-Danlos syndrome, more precisely, one of his variants, called hypermobility, constantly jeopardizes his musculoskeletal system, which is unable to withstand loads easily tolerated by healthy homo sapiens. Just like in the case of congenital insensitivity to pain, this illness can not be cured. It is necessary to observe all precautions for life, and, if possible, to extract from the unusual properties of the organism some benefit. In the end, there is a hypothesis that the great Paganini suffered from Ehlers-Danlos syndrome, which allowed him, with unusual agility, to run his fingers along the violin neck.