How in the world the entrances to hell? 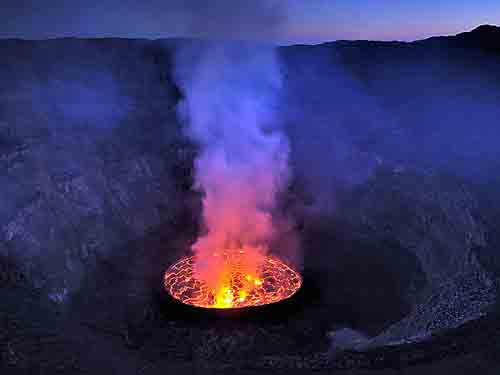 For anybody not a secret that people of ancient times were endowed with some supernatural or medicinal properties of not only objects, but entire places which are called Holy or sacred. There had been miracles of healing, people have had visions, hallucinations. These places of ancient times came pilgrims.

In Azerbaijan such places are called peers. However, on our planet there are places with negative energy, for which notoriety.

Basically, it was ravines, valleys, caves, etc. Over time they added other objects, by virtue of its characteristics on a subconscious level, causing a sense of danger and Association with the other world.

Some places people even believed the entrance to the underworld or the dark realm, but they still drew crowds of the curious. Our today’s collection – it is about the places.

Purgatory of St. Patrick, Ireland. So call the cave on a small island in the middle of Lough Derg in County Donegal.

The tradition says that Christ himself pointed to St. Patrick the location of the gates of purgatory. The cave was considered sacred and was promised redemption for a stay in pain, but go through it in the afterlife could only be a true believer.

A medieval legend tells of the knight Owen, who dared to enter the cave in 1153, to remove from the soul the heavy burden. He was met by fifteen monks in white robes and warned about the dangers inherent in the dungeon.

When the knight confidently stepped forward, the ground beneath his feet opened and he fell into the burning Inferno. Clawed demons dragged him in black smoke and heat by sinners, exposed to terrible torture. Owen realized that he sees the underworld and turned their prayers to the Lord…

The flames then threw it on the narrow bridge that stretches over a burning abyss. Knight went on it and got to the flowering meadow, where he met several priests.

Broken paths they took him to the mountain from where I could see the heavenly Paradise, shining like gold. Coming from it’s rays touched Owen, and, shrouded in divine light, he experienced ineffable bliss.

And as soon as he thought that this feeling could last forever, as it turned out the exit of the cave. Owen realized that he had been in another world, without leaving their bodily shell.

According to the Chronicles, visions, sending the cave, have always been associated with religious themes, so some evaporation, causing hallucinations, excluded as such: what is this evaporation can be – with a focused theme?

Archaeologists and scientists are very interested in the study of one of the alleged entrances to purgatory, but the exact coordinates of the place lost, and the island has long built up. Maybe the cave is located under the Foundation of one of the buildings, or was destroyed by the time…

Nevertheless, every year on the island can meet the pilgrims coming here to pray in the local Church, which is thought to have been built at the entrance to the cave.

Darvaza, Turkmenistan. This place is like a crater called the “Gates of hell” (“Darvaz” in Turkmen means “gate”). But is not the name of the crater, and the nearest village.

And when she got it, no “Gates of hell” next to another was not observed. They appeared, like all the terrible and wonderful in the world – thanks to the intervention of man. In the early 70-ies of the twentieth century, geologists discovered a promising gas field (in Turkmenistan, they are in fact not uncommon).

Started drilling and mining, but during the work of geologists stumbled across a surprise: an underground cavern. It fell through the derrick, equipment and transport, but fortunately there were no casualties.

Of course, from holes in the ground began to flow natural gas. So the local people are not poisoned with harmful compounds, it was decided that the gas to ignite in the expectation that he soon would burn out.

However the crater was not extinguished until now, and not even going. The width of the crater is 60 m, depth – 20 m. Sinister bright flame shoots out of your fingers day and night – but if the day is somehow not touching, in the dark “gates of hell” manifests itself in all its glory: the cavern looks like it came down in the flesh and in color with medieval engravings.

Look at the entrance to the underworld thousands of tourists come: their interest stirs not yet implemented the decree of the new President of Turkmenistan on the need to fill the hole.

Even earlier, in 2004, by the decree of Turkmenbashi was demolished the village of Darvaza. Maybe it’s some kind of bad luck? Anyway, the “Gate of hell” in Darvaza deeply symbolic.

Most interesting is that, according to local residents, near the “gate” began to happen, strange and mysterious things… Perhaps people their intervention has brought to life a dormant evil force?

Another gate is the Gate of Pluto” in Turkey. In 2013, archaeologists discovered on the territory of the ancient city of Hierapolis, near modern Pamukkale, the ruins of a place called “Pluto’s Gate” or “Gates to hell”.

The geographer Strabo, who lived in the 1st century BC, wrote about them that “this place is filled with fumes so dense and rich that it is difficult to see the ground; any bird that flies there, dies instantly”. The researchers suggest that “portal to hell” was used for sacrifices.

In ancient times it was performed the pilgrimage. The pilgrims settled down in the ancient temple, where was waiting for visions and prophecies. There they were protected by toxic vapors, which will kill anyone not of the Saint, who tries to join them

The inscription on the entrance to the cave refers to this legend. Deadly fumes are still there, carbon dioxide gases, which can kill any living creature.

In Nicaragua, too, has its “Gate of hell” hell’s Mouth”: the Masaya volcano. It is located 20 km South East of Managua city and dates back more than two and a half thousand years ago.

Although superficially it does not particularly different from other volcanoes, the Spanish conquistadors believed the volcano a place of evil and called it the “Mouth of hell” or “Hell’s throat”.

The more that local people believed that lives in the crater of an evil God, and in order to appease him they were periodically thrown into the bottom of a volcano young girls.

They believed that the victim calm and the volcano will not erupt. (The most interesting that it helped: hundreds of years, the volcano was silent, the eruption was only in 2008)

Believing in evil spirits and hell, the conquistadors called the pastor, and with his blessing, on one of the slopes set up a cross, which paved the way. They believed that now, no evil spirits from the crater of the volcano does not come out.

Today, the Masaya volcano is one of the tourist attractions of Nicaragua. It is almost the only in the world volcano, a still active crater which can be reached by car.

The bottom of the crater is always corrosive gases, which tickles in a throat and want to cough. Those who are lucky, can see the fiery hole in the bottom, which is framed colored soil. But the volcano is not open often.

In 2012, seismologists noticed some new activity of the volcano and therefore closed the sightseeing platform near the cross, which is well preserved. Now go up there is impossible. Recommended duration of stay near the crater – five minutes.

The huge size of the crater cause goosebumps and make you think about the power of nature. Moreover, scientists are quite officially called the Masaya volcano is a hub of paranormal activity. Here the frequent phenomenon of the glowing objects, failing electronics, many hallucinations.

Curiously, the volcano and the beliefs surrounding it, gave rise to the conversation of the Monk Juan de Torquemada, in which he quoted the material existence of volcanoes as the reason why they could not be Hell or the entrance to it.

The Cave Of The Sibyl. This is one of the most famous and most mysterious places in Italy. Located in the famous Acropolis of Cuma, the cave is a gallery impressive: the 131 m long and 5 m in height.

In this place, according to ancient legend, lived Kuma sibyl, known as the majestic and terrible priestess of Apollo. According to legend, the girl asked God for so much of my life as would fit grains of sand in her hand, but eventually became a victim of its longevity: about the eternal-youth to forget the fortune-teller asked, therefore, gradually dried up and kahlila

The cave of the sibyl has the appearance of a trapezoidal tunnel, with six branches on the right side, it is often filled with volcanic gases, which could explain the different visions of its visitors, and ancient legends.

Some scientists believe that the cave Kuma sibyl in antiquity was a military target, not a refuge and a location of a priestess. By the way, not far from it is lake Avernus that the Romans and Greeks were also believed to be the entrance to hell.

Acheron River, Greece. According to Greek mythology, the Acheron is the river which carries the souls of the carrier Charon from this world to the underworld. So say the ancient Greek myths. And in “the divine Comedy” Dante’s river Acheron encircles the first circle of Hell.

But this river does not exist only in myths and other literary works, but in the real world. The river is in the Epirus region of Thesprotia, passing through the rugged, wild, rocky height Kakouli, the grip of a dark and narrow gorge, with a length of 5 km, the plains of Epirus (or Kaira).

After him, the Acheron flows through the plain until it reaches the Ionian sea. Perhaps, it is the view of the river, deep, capricious, clad in the impenetrable dark of the gorge, was the cause of legends about that here is the entrance to the underworld.

However, as has long been common knowledge, no myth was not born in a vacuum. Greek and Roman mythology – how strange connection tangible and intangible, that make take yourself to seriously.

Mount Olympus, home of the gods is a real place, and why is it the gate to hell can’t be real?

Needless to say that tourists trying to swim here from one coast to the other. The more that this mystical place is still shrouded in modern legends. Say, for example, that many curious and never returned from a trip to Acheron.

Houska Castle, Czech Republic. This is a castle of the XIII century, while in most construction projects there is a logical explanation for their location, the castle Houska is in place, which gives it strategic value, no access to goods or resources, and no nearby water source.

The strange building was developed with a small amount of external defense and a lot of features that seem built to keep something inside. The legend says that the castle was built over the entrance to Hell.

Local residents have been witnessing strange flying creatures and long lines of tortured souls chained together and asking for mercy. Once criminals have offered forgiveness instead of putting them down into the pit and find out where it leads, but this project was never realized.

As soon as the castle was built, stories of strange noises, screams, and the appearance of otherworldly monks continued.

Houska was occupied by the Nazis during the Second world war, which in his memoirs, too, noted the strange phenomena going on in the castle.