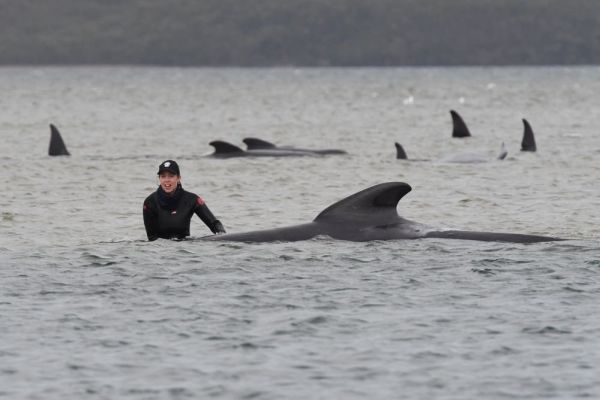 Australian rescuers on Tuesday tried to float hundreds of pilot whales stranded on a sandbar off the remote west coast of the Australian island of Tasmania, hoping to end one of the worst ever mass releases of mammals of this species ashore.

90 of the approximately 270 whales trapped in shallow water could not be rescued, the BBC said. A large number of animals died on the wide sandy spit in Macquarie Harbor, located about 200 kilometers northwest of the state capital Hobart, while others floundered in the shallow waters. Marine biologists fear that the death toll will increase. It is not yet known what attracted the whales to the shore. There has not been such a massive release of whales in Tasmania since the 2000s, when just over two hundred individuals were on the shore.

Rescuers from the Tasmanian Marine Conservation Group arrived in the harbor late Monday and found three groups of whales at Cape Macquarie, a remote tip of the island with limited access by ships and roads. Many whales are in “relatively hard to reach” locations, which creates problems for rescuers. The rescue operation itself, which is complicated by strong waves, is expected to last at least two days.

Many animals, experts say, may simply be too large or in the wrong place. Pilot whales can grow up to seven meters in length and weigh up to three tons. It is known from previous animal rescue missions that a grinda can survive three or four days onshore. Subsequently, they die from dehydration or destruction of the body under the weight of their own weight. Every year, more than two thousand whales are dumped on the coast of the seas and oceans of the world, mainly on the beaches.