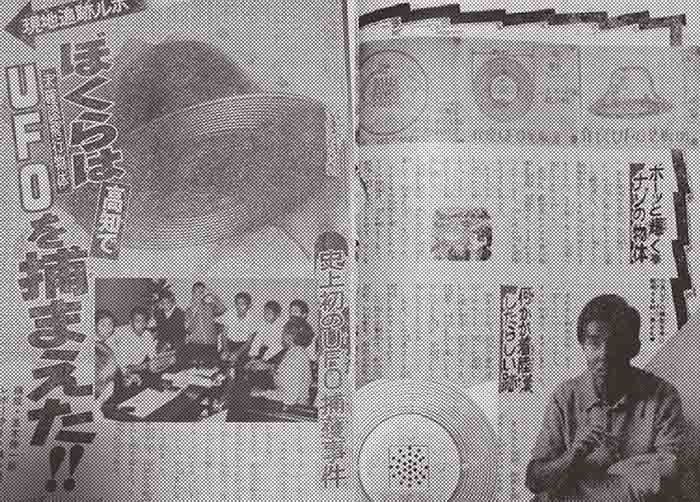 Did Steven Spielberg know about this case when he shot the film “Batteries are not included”? A group of Japanese schoolchildren from the town of Kera in 1972 managed not only to repeatedly meet with a miniature UFO and take a picture of it, but also to capture for a while “prisoner.”

It all began on August 25, 1972, when the 13-year-old schoolboy Michio Seo was leaving school. On the way home, he noticed a small metal object flying over the rice field. Michio watched as a mini UFO in the form of a silver hat with a flat bottom moves like a bat hunting insects. The boy began to get closer, but the object sent a bright beam in his direction. Seo realized that it was not worth getting any closer, and ran away.

In Kera Michio, he told the friends about Hiroshi Mori, Yasuo Fujimoto, Katsuoka Kojima and the guy who is known only as Yuji (either he could not be found by ufologists or his parents insisted on anonymity). They decided to go to the rice field and see if there is still an object.

At about 19.00, five children came to the field. There was no UFO, but within an hour the object returned. Now all five watched him fly 20 meters from them. The sun was setting, twilight was beginning. The object began to emit a pulsating multicolored glow. One of the guys chased after the “plate”, but when he approached the UFO, a very loud clap sounded, and the object began to glow with a bluish light. Frightened, the guys ran to their homes.

Schoolchildren returned to the field several times. On September 4, their expectation was rewarded: around 21.30 they again saw a UFO flying about a meter above the ground. This time he rushed towards the guys, forcing them to retreat. The guys realized that they need a camera, otherwise no one will believe.

In the evening of September 6, the guys were ready to shoot. Approaching the field, they saw a mini UFO lying on the ground. As soon as the flash flared, the object began to spin and quickly flew into the air. The second shot, taken by Hiroshi, captured him already during the flight. The UFO lit up brighter than the flash of the camera, and again fell to the ground. He was spinning, as if he was going to dig into the ground, and finally stopped. Hiroshi ventured to come closer, and when nothing happened, he took the object with his bare hands. The boy felt that something was moving inside the body. This moment was also photographed.

Finally emboldened, Hiroshi Mori wrapped the “plate” in a plastic bag and put it in his backpack. At his home, the boys properly considered the captured UFO – its diameter was about 20 cm, height – 10 cm. He weighed about 1.5 kilograms. On the body of the UFO from the bottom were visible 31 holes and three symbols or a picture.

Then UFO was dragged into the house of Yasuo Fujimoto, because his father Mitsuo worked as the director of the Center for Scientific Education of Keci. Fujimoto Sr. twirled a “plate” in his hands, but did not take the children’s story seriously. The UFO returned to Mori’s backpack, but the next day it was no longer there. 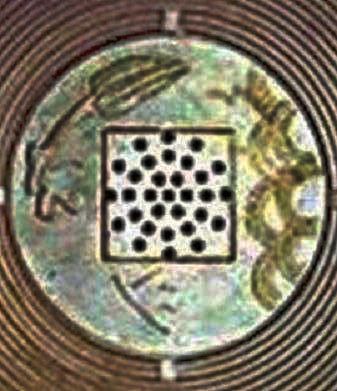 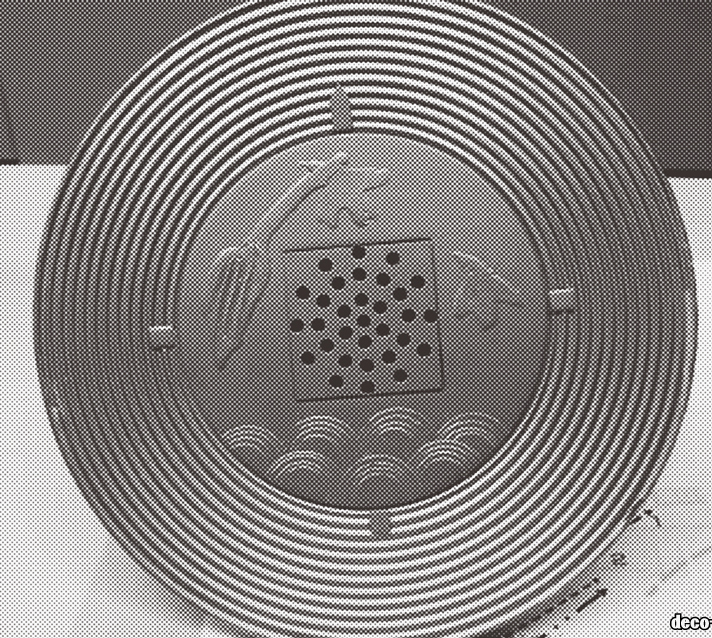 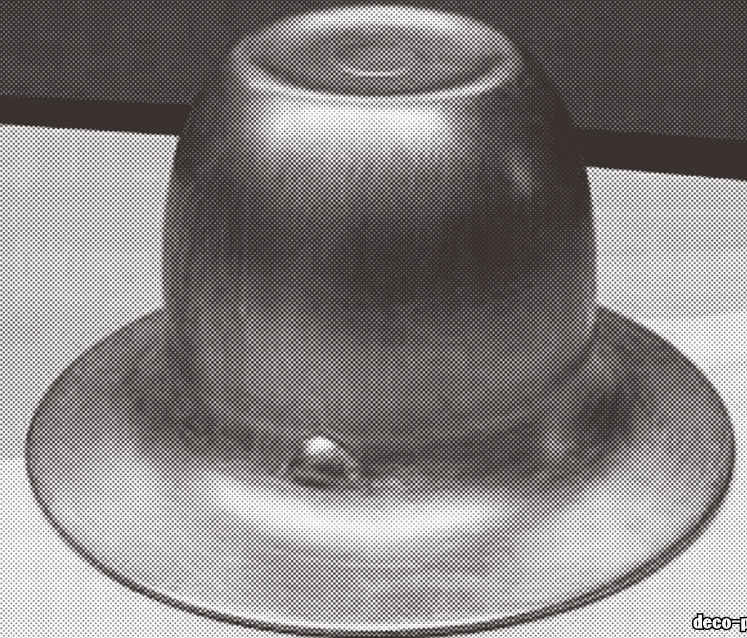 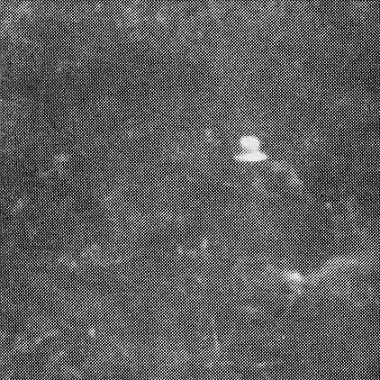 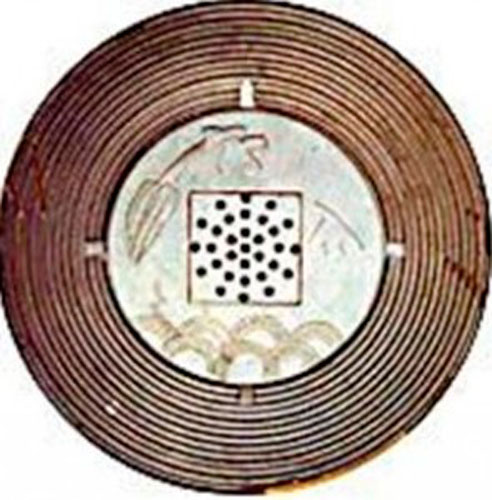 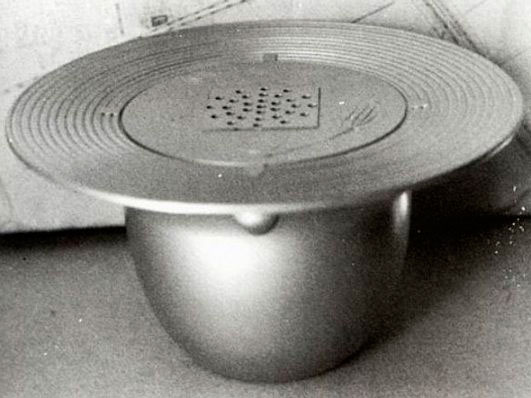 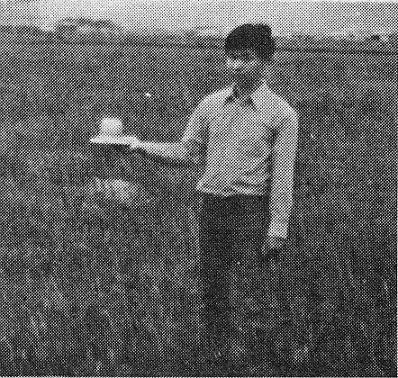 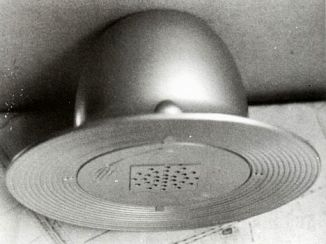 Over the next two weeks, the guys saw this or the same object six times and again managed to capture him! They noticed that a mini UFO never appears in the rain, which means it “is afraid” of water. September 19, the guys came to the field with a bucket of waste water and rags. Finding a mini UFO on the ground, they threw rags on it and poured out most of the contents of the bucket. Then they turned the UFO and started pouring water into the holes on the bottom of the case. As soon as the liquid penetrated into it, the object began to buzz loudly, like a cicada, and its interior lit up. To consolidate the success, the guys threw the apparatus stones. When the sounds and glow stopped, the UFO was dragged into Kotsuoka’s house.

The guys tried to hack the case, pushing the wire into the holes and blowing it inside. Eventually a gap appeared between the bottom and the dome. Looking into it, students saw “complex electronics” and “some sticky stuff.” Maybe it was the remains of a UFO pilot ?! Attempts to finally break the hull with a hammer, however, were unsuccessful – the metal did not succumb to rude efforts. Then they decided to shove the UFO into the oven and turn it on, but Kotsuoka’s mother resolutely opposed. She also did not allow the refrigerator to store mini UFOs – the guys thought that his metal walls would not let the UFO disappear or give a signal about his whereabouts.

The object had to be stored in the room of Seo, wrapping it in rags. When the guys decided to get it again, they found out that there was nothing under the rags! The UFO disappeared without loosening the knots, as if evaporated.

A few hours later, Kojima and Maury played a ball next to Hiroshi’s house. Running behind the ball to the fence, Kojima saw a UFO lying motionless on the ground. He was brought back into the house again. The guys decided to put the UFO in a plastic bag of water and seal the edges so that it no longer disappears.

September 22, the guys decided to take the find to Keci. As they rode there on bicycles, schoolchildren wrapped a bag with a rope, and the free end was wound up on the hand of the one who drove it, so that the find would not go anywhere. On the way, the one who was traveling with the object felt a jerk by the hand. The bag was still lying on the trunk, but when the guys unpacked it, there was nothing inside. The water did not help. More they did not meet with the mysterious apparatus.

In 2007, the Japanese ufologists Shinichiro Namiki and Katsuo Hayashi again interviewed all participants of the events, making sure that their testimony during this time has not changed.

On this video, the participants of these mysterious events with the help of a copy of the UFO, created by them, show how all these events happened.

I own the copyright of the image of the Kera disk model.

Please delete the image or insert ©Kozo Niwa or deal with it.

If you do not, you will be charged for its use.