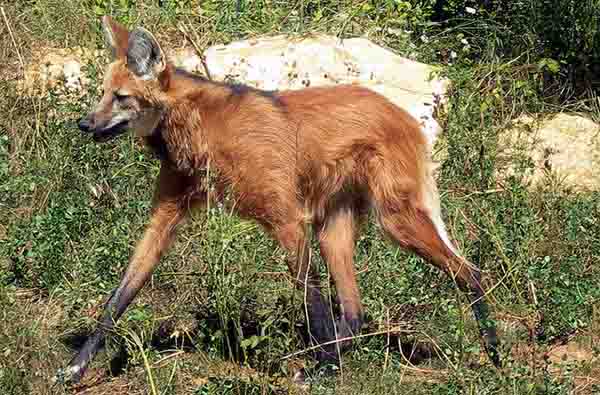 In the savannahs and steppes of the central part of South America, graceful predators live, which locals call “guara” or “aguara guasu”, which means “big fox”. But in fact it’s a wolf.

The greyish wolf (Latin Chrysocyon brachyurus – “short-tailed golden dog”) – the owner of a unique appearance. It really looks like a big fox: a red fur, a thin elegant muzzle. But from the fox it is distinguished by long slender legs, much longer than in other dogs. At the withers, this beast reaches 87 cm, and weighs 23 kg.

The peculiarity of the bodily constitution helps him to hunt in the tall grass that grows on the wolf’s habitat.

The species is under threat of extinction, its representatives come across people very rarely, because, firstly, people are not hunted, and secondly, they feed on what the wild nature has given.

Only in extreme cases, a maned wolf can drag a lamb from a farm or some screaming poultry. 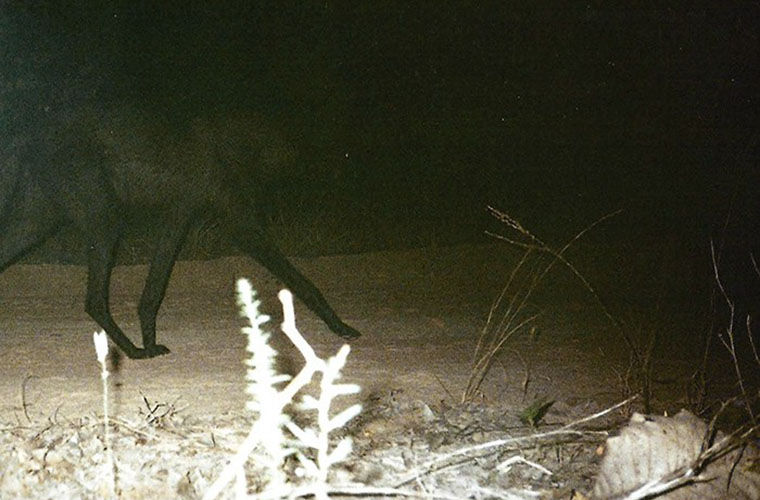 Even more unique is the black maned wolf. One such specimen was caught in camera lenses attached to trees in a Brazilian village.

Although melanism is most often seen in felines, it can also be found in reptiles, insects, as well as canines, cunts and viver. The study notes that among the Brazilian dogs, this phenomenon was recorded for the first time.

The traps set in the village of Varedash-do-Akari provided the zoologist with 25 images of grizzly wolves. In five photos, a black wolf was seen.

This is the first evidence of the existence of melanism among grivist wolves, the researchers note. But why this wolf turned black? Most melanists from the canine family belong to the genus Canis, which includes wolves, coyotes and domestic dogs.

“Blackening” among coyotes and wolves has spread due to crosses with domestic dogs that have occurred for the last 50,000 years, that is, much later than the branching off of the branch of a maned wolf. Given that there are no known hybrids between coyotes, wolves and grivist wolves, the mutation of the latter arose independently and evolved from the preservation of black, puppy, color in the adult state.

A red maned wolf is difficult to notice in the grass, especially in the twilight – the optimal time of day for their hunting. For sure, a black maned wolf has advantages during night hunting.