In Brazil, they found a bat with two heads 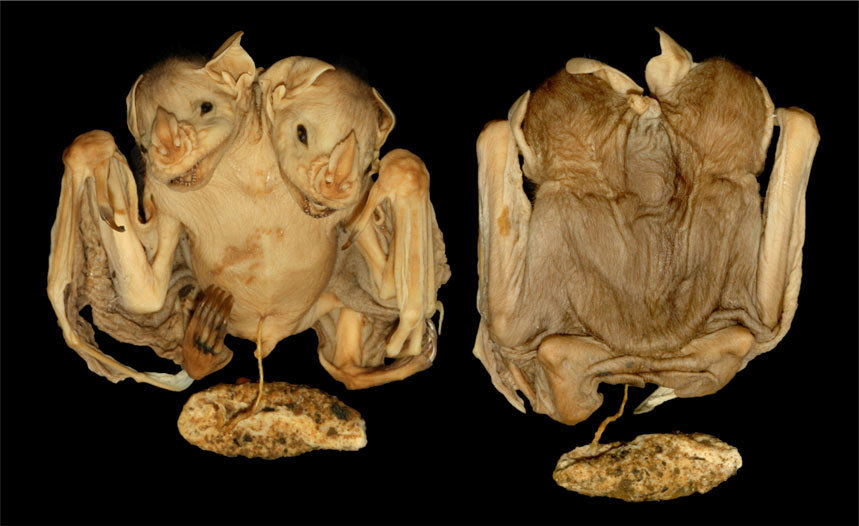 Brazilian naturalists told about the discovery of the rarest “double-headed” bat, the third find of this kind in the history of science, the study of which will help scientists understand how such developmental disruptions arise.

“I was absolutely amazed at this discovery, I saw a lot of bats in my career, some of which had extremely interesting features of anatomy, but none of them can compare with these” Siamese twins, “says Marcelo Nogueira, From the University of northern Rio de Janeiro (Brazil).

Scientists and townsfolk often find bizarre animals with two heads, “extra” pairs of limbs and other features of typical “Siamese twins.” In recent years, biologists have found dozens of examples of such creatures both among land, sea and flying animals and birds.

Contrary to ordinary ideas, they are not a product of certain mutations that caused the embryo to grow one more head or extra paws, but an unusual violation of the development of identical twins, whose organisms for some reason could not separate at the first stages of fetal development.

Why this happens is still a mystery, and therefore every discovery of such a “Siamese twin” is especially valuable for biologists. Find them not so often, since such individuals usually die at birth and their remains are eaten by scavengers and predators.

The discovery of “Siamese” bats, as Nogueir says, is even more rare, since female mammalian bats usually produce only one offspring. For all the time of observations, according to the biologist, only two cases of the birth of a “double-headed” bat – a large brown leather, whose body was found at the threshold of one of the Canadian schools in 1969, and a brown leaf leaf found in Belize two years ago, were known.

Now this collection was replenished by a double-headed individual of fruit-eating leaf-heel (Artibeus obscurus), whose body was found by the inhabitants of Espiritu Santo in 2001, who walked along local forests. The corpse of an unusual bat they handed over to Antonio Peracci, the famous Brazilian zoologist, in whose home collection she was stored in alcoholized form until she was interested in Nogueira and his colleagues.

Comprehensively studying it and enlightening with the help of an X-ray, scientists found that the “halves” of the bat remained independent from each other approximately to the level of the chest, where they were connected, including at the level of the spine. With the exception of two heads, two hearts and a rudimentary third hand growing between them, this bat as a whole differed little in appearance from its “one-headed” cousins.

Judging by the fact that this bat was found along with the placenta, she most likely died at birth or died after miscarriage from her mother. The study of these remains, as the scientists hope, will help to understand what leads to the appearance of similar problems of development in human children.