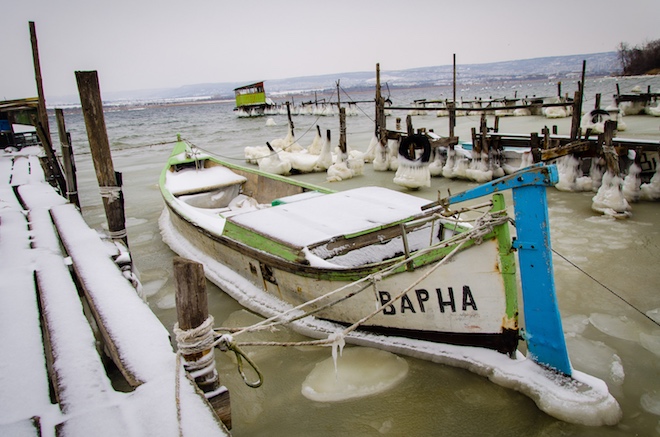 Abnormal cold in Bulgaria for the first time in 60 years froze the Black sea. The last time the sea in the Bulgarian resort of Burgas was covered by an ice crust in 1954. In the entire twentieth century, the ice used to this part of the black sea is only 3 times.

This winter icing of the Black sea in Bulgaria was unpleasant, but expected event. Surprising considering that the Balkan country is experiencing severe cold for the last century. In some areas the temperature dropped to -29 degrees Celsius.

Before frost could not resist and Varna lake. Pond pulled a thick, icy crust at a distance of 30 meters from the shore. This largest lake on the Bulgarian coast didn’t happen 5 years. The nearby town of Varna is also experiencing difficult times — the temperature dropped to -11 degrees Celsius. For comparison, the average January temperature is 3 degrees Celsius.

The current winter tests the strength of many European countries. Italy froze the famous waterfall and Roman fountains, Montenegro snowing, and in Belgium frozen to the rails of the train. The harsh winter is associated with global warming. The impact is felt not only in exhausting the heat waves, but in the rains, floods and even the strongest colds.

These people have no shame: “the harsh winter is associated with global warming.” I guess global warming must have been a problem 60 year ago as well.

It’s an incomplete sentence. It should read “the harsh winter is associated with global warming by those who seek to gin up climate hysteria”.

Global warming is a joke. The only thing that threatens nature is mountains of litter, destruction of habitat, and poaching.

What illiterate wrote this piece of nearly incomprehensible excuse for journalism? Perhaps this was taken from a Bulgarian or Russian article, translated with an automated translator and published with no further editing. Either way, it is disgraceful.

If Global Warming gets any worse we will all freeze to death!