In China, a pig-mutant was born 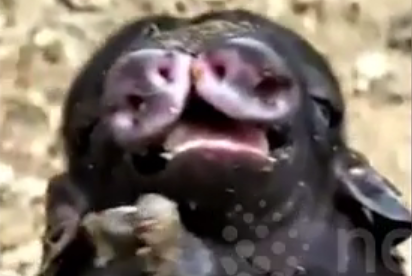 In China, a pig-mutant was born with two piglets and four extra legs on his back.

An unusual animal was filmed on video right after his birth in the Chinese province of Fujian on November 11. As it turned out, the pig was born this way, as the two twins merged in the womb of the sow. Piglet lived only three days.

On November 21 it was reported that a five-legged ox was born in China. The extra leg grows from his back and hangs down along his right side. In the rest the animal is healthy, grows rapidly and develops fully.