In India, the girl “petrified” due to a rare disease 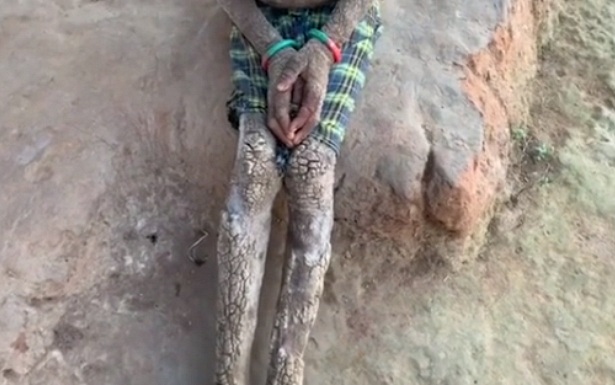 A little girl from the Indian district of Dantevada, Chhattisgarh, was “petrified” due to a rare disease that makes her skin look like stone.

Seven-year-old Rajeshwari is ill with incurable epidermolitic ichthyosis. Her arms, legs, and most of her back are covered with hard blisters that resemble scales. Because of them, it hurts the girl to walk and sit. Since there are no good hospitals in Dantevad, a child has to go for examinations to the city.

Ichthyosis is not life threatening, but patients have to endure its symptoms for life. Due to reduced perspiration, people with this disease are more likely to receive heat strokes, and cracks in the skin make them more vulnerable to infections. In addition, they often have impaired vision or hearing.

Usually, ichthyosis is inherited from one of the parents, but it can also be acquired against the background of other health problems. Patients with ichthyosis are forced to spend several hours a day on skin care.

It was previously reported that in the Indian state of Orissa, a ten-year-old boy was nicknamed a snake because of a rare disease – lamellar ichthyosis. The whole body of the child is covered with coarse and cracked dry skin, which resembles the scales of a snake.