In India, the woman was halved after the birth of her third son 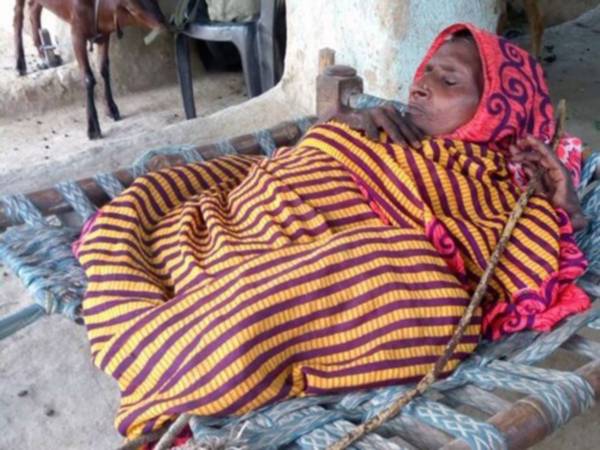 Shanti Devi lives in a small village in India. About 25 years ago, she was no different from the rest of the inhabitants of the district, but after the birth of her third child, a son, she became ill with an unknown disease, which has decreased in size by more than half. Now her height is around 2 feet.

The patient may tilt his head, straighten arms or stretch their legs — they declined and squirmed, becoming so hard that the woman cannot move. All the time she spends in the cradle, muttering or humming. Shanti Devi is forced to ask their children for help. In this state it is already more than 20 years — before she could even crawl or walk, but after her legs fell thatched roof of a neighbor’s house, the patient is no longer able to stand. She is bedridden and, according to her, in a lot of pain. Shanti Devi also said that she is very boring to live, and she misses the days when he could walk, chat with friends and to water your plants.

Woman’s husband, Gangacharan Kushwaha added that before the birth of the third child his wife never complained about his health — but immediately after delivery she became very slow and weak, and in a few months, admitted that her bones are constantly and very sick. Shanti Devi began to decrease and, noticing this, shared her concerns about this with the family, but they didn’t believe her until I saw for yourself that she is over 4 months was lower by 15 see Husband drove her to doctors but none of them was able to help the patient. “I took her to several hospitals. Where people advised me to ask where I was headed, and even when I had no money, I did not lose hope. But the result was not, and I stopped doing it,” — said the husband of the patient. For more than 10 years of Shanti Devi was not a doctor, and her condition remains a mystery to her family — but it attracts tourists in her village. People travel from afar just to look at her.

Local therapist Pankaj Srivastava suggested that the patient may sick with osteogenesis imperfecta, also known as “crystal sickness of man.” This is a rare genetic disorder in which bones do not have enough collagen, and they become brittle.