In Poland, they saw a strange creature 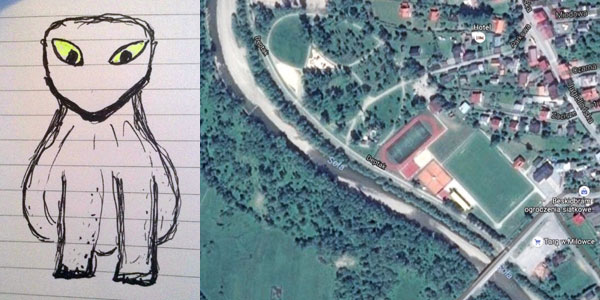 Damian Trela – Polish researcher of anomalous phenomena. In addition to the topics of UFOs, he pays special attention to the so-called cases of high-level weirdness. But nevertheless… In this case we will focus on the event where the witness had a chance encounter with a strange creature in strange circumstances.

In July 2002, in the small village of Milowka Mrs Christine while participating in a local mass event experienced a close encounter with the mysterious Chimera. Interestingly, a strange creature had only observed it.

All this was accompanied by a rather strange distortion of space-time. This suggests that the basis of this meeting should seek mental-mental factors. If it was a real creature of flesh and blood, or something else – we can only guess.

This story has actually happened, so the beginning of her story during a phone conversation who is now in exile, the 32-year-old Mrs Christine.

Her lived experience contains a very significant paranormal element and simultaneously finds Parallels with folklore. Such events, where the witnesses see the demonic creatures, as if came from the pages of fiction or mythology, with many paranormal researchers, proceeding from the absurdity of the situation, accepted with restraint, making many of these messages remain on the periphery as difficult any assessment.

Also, very often such witnesses is attributed to nadinterpretacja events and in extreme cases, cheating. The problem is that experienced by p. Christine authentic, and many years later she returns again and again in thought to that day, which was deeply imprinted in her memory.

The following events took place in the small village of Milowka, located in the Silesian Voivodeship, in July 2002, The way we treat the message p. Christina, depends entirely on how wide open our minds to accepting the unknown. This case opens up a broad field for discussion on the question of how complicated our world.

This happened quite some time ago – said Mrs Christine. When I was 19 years old. In a day I went to Milowka to the event which was held at the local stadium. We got there by train. To get to the stadium, we had to overcome from the station through the fields for about 2-3 km.

During the event, we talked in a larger company – we were joined by friends. At some point, it became clear that everything is already complete and we should be thinking about returning. It was almost 21.00. One of my acquaintances offered to drive me to the house to rid us from the tedious journey to the station and travel by train. This offer we had to taste, as we were able to linger at the fest a little longer than expected.

When we sat and talked, suddenly someone came to us and reported that someone smashed with a stone window in the car. All immediately stood up and quickly went to the car, and I with them. I don’t know why this incident so we were interested in, but we all together stood up and quickly headed to the scene. The car was parked on the nearest Parking. I was walking behind everyone.

At some point I felt a strong impulse to turn over the left shoulder. He looked and froze. At the end of the Parking lot, the light of the lantern sat a amazing creature. I stopped and started this something to look at. And it looked at me with mutual interest. We divided the space of a few meters.

I don’t know, when a group of my friends went. Suddenly I ceased to hear voices around him, I felt disconnected from the surrounding reality. I stood as if hypnotized, but at the same time aware of what you’re doing. The creature I saw looked like a dragon.

This Association arose when I looked to his head. The head was broad and flattened. Characteristic was her eyes – slanted and yellow. The creature sat on its hind legs, while the front rested. It was in the position like sitting on hind legs dog. Falling on it from a nearby lantern light outlined his form.

It was a massive animal, growth might, 60 cm, with a massive front paws. The last ended like fists, so I saw no fingers or claws. I also noticed the color of his body – it was dark and quite rough. The creature sat on the edge of the Parking lot and lawn. It was rotated to me before, so I didn’t see how it looks from the back.

Intrigued, I approached him at a distance of 3-4 meters. I stood and watched. Through four minutes, it began to look to the left side and gradually unfold to the left front paws. In the end, I don’t know what ended this observation. The next thing I remember is a car and a lot of glass around.

Don’t know when I was around the car, standing 15 metres from the scene of the event. All these memories came back to me the next day. When I was standing in front of that car, it was like numb, I didn’t remember too much. Still I wonder why I did not react, not afraid, not shouted that someone also saw it. My reaction was incomprehensible to me.

When parsing certain aspects of the messages of Christina p. it can be noted the presence of some aspects that are very characteristic of paranormal phenomena. There is a special tune mute witness, which is often found in many cases, close encounters with UFOs.

I felt completely isolated, but at the same time well aware of what I see, – the eyewitness reported.

In this case, it is difficult to aggregate these events to hallucinogenic States. P. Christina never had similar experiences and did not use any intoxicating means, which could affect the quality perception. Yet she felt for some time disconnected from reality.

This indicates that the events could develop in a different plane of reality. It should be added that the witness also remembers the moment when she was back near his friends, near a car parked 15 metres from the scene. Her friends also didn’t notice that Christina 4-5 minutes broke away from their company.

I just don’t remember what all this surveillance ended, extinct creature and I was near his friends, she summed up.

So everything just happened? Some fluctuations of space-time, or this being, which was noticed by p. Christina, should be considered from the point of view of cryptozoology? It is hard to believe that Milovka picks a living relic, who suddenly appeared in the center of events, and no one else never noticed. How then can we interpret this event?

Such incidents reveal a close connection with folklore and mythology, being thus a manifestation of a living folklore. Slavic Ethnography is full of legends about encounters with Chimera (demonic creatures) who have taken up people the right way and planted in their psyche fear and confusion.

Usually we look at things through the prism of rationality and interpret them as folklore. However, it should be noted that similar, though rarely, but it happens also now. This is evidenced by reports collected among the researchers and is also involved in Arkadiusz Miazga who identify their section of the Polish Mahonia.

If we ignore the cryptozoological aspect, we can come to the conclusion that the power behind such meetings, teetering on the border of our reality and collectively connected to the human psyche, to get out of our subconscious images that may be perceived.

The situation in which such things happen should not necessarily be confined to our three-dimensional reality. It can be a landscape of a reality in our conglomerate.

The range of versions is very wide, but the implication of events such paranormal component always comes down to one thing: the absurd stimulus (vision of demonic monster), stimulating the human subconscious cognitive interest and to widen the perspective on the supernatural. And all of this opens up broad opportunities for intellectual search.