In Siberia there are giant mysterious craters 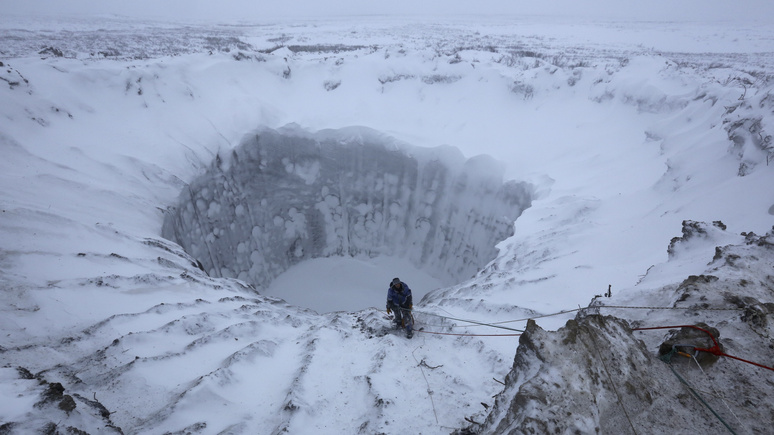 Because of the high temperature, mysterious giant craters appear in the northern regions of Siberia. Climatologists say that this can lead to even more disastrous consequences.

In this region there is thawing of permafrost, which leads to serious changes in the landscape and ecology of the region. It can also threaten people’s lives.

“The last time permafrost melted 130 thousand years ago. This is a natural phenomenon associated with changes in the Earth’s orbit, “said Gideon Henderson, a professor at Oxford University. “But what’s really unprecedented is the rate of melting.” Melting, which happened 130 thousand years ago, occurred for thousands of years. Now we see that the melting is happening for decades or one century. ”

Thus, according to Henderson, we are witnessing a much faster thawing of permafrost.

Under normal conditions, permafrost regulates the amount of carbon in the environment, taking and retaining a significant portion of the carbon that is released when people burn fossil fuels.

“When permafrost releases carbon, it increases the rate of warming in the future,” Henderson said.

Since 2014, several large funnels have been discovered in the region. One of them, reportedly, was over 50 feet wide.

There are several hypotheses about how craters are formed, but according to the professor of geophysics at the University of Alaska in Fairbanks Vladimir Romanovsky, none of them has been proven, the American channel reports.

“However, all these hypotheses are based on the fact that the temperature in the region is rising,” – said Romanovsky.

The formation of these crater-like holes can have serious consequences for the inhabitants of Siberia and the environment.

According to one theory, holes are formed during explosions of trapped gas, during which such greenhouse gases as carbon dioxide and methane are released.

According to the researchers, the question of whether a significant amount of greenhouse gases is released into the atmosphere during the formation of these craters remains to this day open.

“There is no data on how much methane is released into the atmosphere, because we do not know how these craters are formed,” said Romanovsky.

Thawing of permafrost already adversely affects the lives of the inhabitants of the northern regions of Siberia.

“People in the permafrost regions depend on the frozen ground, because the infrastructure is based on it,” Henderson said. “When the earth melts, the railway collapses, roads fall apart, the buildings fall under the ground … This is already happening.”

Henderson added that threats to the infrastructure will increase as the defrost continues, and this can pose a problem for large industrial zones, including oil and gas fields.

“And if the fact that explosions of gas create craters, it is true, because of this people can perish,” – says Romanovsky.

According to him, the Russian government and Russian companies, especially in gas production, provide funds for further research on this phenomenon.