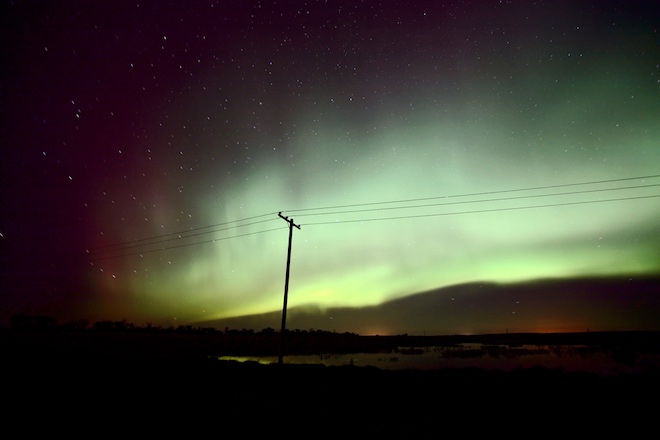 In the North of Sweden, a photographer and tour guide Oliver Wright heard and recorded a strange noise. This whistling sound he heard when he conducted a tour for your group at Christmas, standing under the bright flashes in Abisko national Park. Surrounding also heard it.

Wright decided that he was coming from the power lines, so I approached them closer and recorded the sample with the help of your smartphone. When he approached the power lines, the sound intensified, and when went became weaker. He has heard it 3 times — during previous trips, and each time close to power lines, however, the first time he was able to record it.

Some experts believe that the sound was the result of “electronically transduction”, which is created by converting electromagnetic energy into mechanical motion. This could lead to the fact that the current went through the nearby transmission lines with sufficient force to cause them to shake and make noise.

According to astrophysicist Dr. Tony Phillips, during the Christmas of auroras was noted increased activity of the magnetic field around Abisko. Strong low-frequency currents can literally make objects shake, causing acoustic vibrations in the air.

For more than a century there have been reports from observers of the Northern lights, heard weak hiss or crackle. A majority of these reports attributed the rumor, but Finnish researcher unto Laine is confident that the lights may lead to the appearance of clapping sounds. He noted that there are thousands of reports from observers around the world, but there are also recordings where you can hear a variety of sounds — crackles, POPs, clicks, rumble and low frequency noise.

As the scientist believes, the sounds appear during intense auroras when it is cold and clear weather. They can appear when the layer of relatively warm air “hiding” a layer of cold air near the earth’s surface. Then electric charges are accumulated in a warm layer of air, while opposite charges — in the cold layer, and when there is intense radiance, it can cause geomagnetic disturbances that consume electricity and produce sounds.