In the Amur region found a strange animal 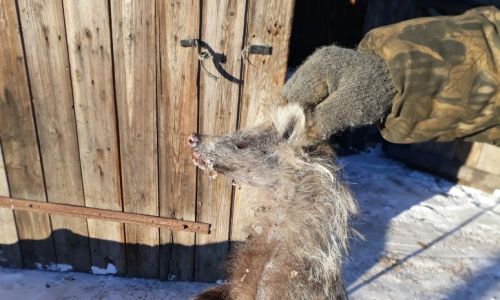 A strange creature was found by the villagers Gilkin, Tambov district. It came out of the forest to people, but soon died.

As told by the inhabitant of the house, near which were seen the animal, he looked sluggish on the territory moved slowly, as if half asleep. No sound issued. After some time the villagers saw him dead — frozen.

— My long hunters he studied, but did not understand what the animal is. Like the muzzle and paws of a badger, raccoon pile. But in fact, none of these animals it is not like, — said the resident of the village of Gulcin Sergei Sokolenko.

I am great at identifying animals as I’ve been in nature all my life and study animals every day for years, but for some reason this animal is familiar to me, and I should know it, but I just cannot remember the name! Perhaps it is a rare type of Russian oppossum?? And this is just guessing obviously, but it kind of reminds me of a porcupine that has no quills.