In the Kursk region caught chupacabra 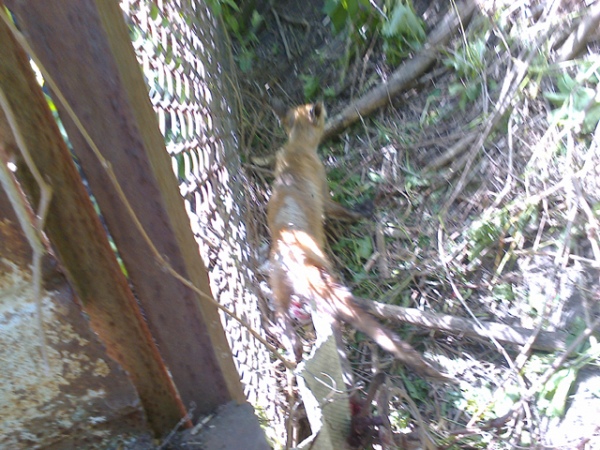 In the Kursk region, there was a man who not only had a personal contact with an unknown beast – the Chupacabra, but he was also ready to present evidence. The pensioner of the Ministry of Internal Affairs Vladimir Postolny, who lives in the town of Rylsk, has been known as a legendary person since the time of his service in the militia. Now local people call Vladimir Ilyich not otherwise than in the Indian manner – “The One Who Killed Chupacabra.”

Rumors about a strange predator in Rylsk went for a long time, three years ago, the media wrote about some “Chupakabr”, which allegedly struck at night in the center of the city and drank the blood of domestic animals.

Sam Postolny – not a fan of bragging, in the police appreciates the facts. He lives in the street Embankment, which stretches over the floodplain of the river Seim. A meeting with an unknown beast Vladimir Ilyich can not even remember today without a shudder … And the background is as follows.

“I,” says, “have three chickens and a cock. Somehow one began to be carried on a neighboring abandoned manor. After tracing it, I discovered a secret nest with 24 eggs in the thickets near the ruins of the shed. ”

The pensioner thought that the hen would take out the chickens, and three days later, going up to the nest, he saw that all the eggs had disappeared-they were eaten, so that not a single shell could be seen anywhere: “I thought a marten devoured or some other beast.”

Since Postolny is an avid angler and hunter, the excitement broke out. “Put the trap, put the egg. In a day – it is eaten, but no one got caught! Someone is cunning comes, means … “Soon a mysterious predator ate a chicken, which was in a locked cage. “How did he get there ?!” In the corner there was a hole in the grid. The owner of the farmstead furnished this place with two traps. For a while nothing happened.

“I hear eleven o’clock in the morning: in the enclosure – a clang, a clang! And again – a clang, a clang! I’m there. He looked: this reptile is sitting in the trap! And from one of his kind I already became sick! It’s disgusting to look at a rat, right? But the rat is bullshit compared to this rubbish! The body is covered in some places with scales, but a weak undercoat emerges. He looks angrily, his teeth claws – solid fangs. The abomination is extremely unbearable! He jumps in the trap, he rages. And I already have it all inside out inside out – well, it’s impossible to see such a thing! .. »

The creature is so unusual that the rylan, and after a while, gets confused, to which gender and sex it belongs – male, female, middle … The meeting with the owner of the manor on the Quay ended tragically for the newcomer. In the enclosure, the Underworld came with a shovel in his hand and set it in motion, one might say, in a state of passion – both from intolerance of the spectacle, and from fright. For a moment, it seemed to him that the jumping malicious creature was about to break and pounce on him. He buried his victim as soon as possible, just not to see, even the trap was not removed from the front paw.

What was it all the same? Wikipedia states: “Often, animals (dogs, coyotes, foxes, jackals, pigs) modified for diseases or mutations are taken for Chupacabra.” Vladimir Postolny is also inclined to this opinion.

– Most likely, it is a mutated fox, on the basis of which nature produced some new creature. Dimensions and outlines of the body of the beast is like a fox. And his legs are twice as long – almost like a roe deer! There is almost no wool on the body – a little on the tips of the ears and front paws. A thin, long creature, with scales on the trunk! .. And an advanced creature, very clever! She came in the afternoon, which the fox usually does not do, and only from the third time she got caught in a trap!

Then, overcoming the nausea, he took a few pictures of the “chupacabra” on the mobile phone before burying it. Four out of five frames did not end up in the end, on one the outlines of the lying creature are discernible. Probably, even from such a photograph specialists would extract valuable information, Postolny stores it on the phone’s memory card, ready to produce. He and the place would indicate where he buried his victim. But it seems that this is of little interest to anyone.

And in vain! After all, the results of mutant research can serve the benefit of environmental education and upbringing. In Russia, already known fish, which has adapted to devour in water reservoirs plastic and tires. In Rylsk, around which heaps of household rubbish are piled up in the forests, something “on the basis of a fox” appeared. If we continue to so litter and poison nature, you see, and people will begin to be born in the scales …