In the Perm region in one night suddenly disappeared lake 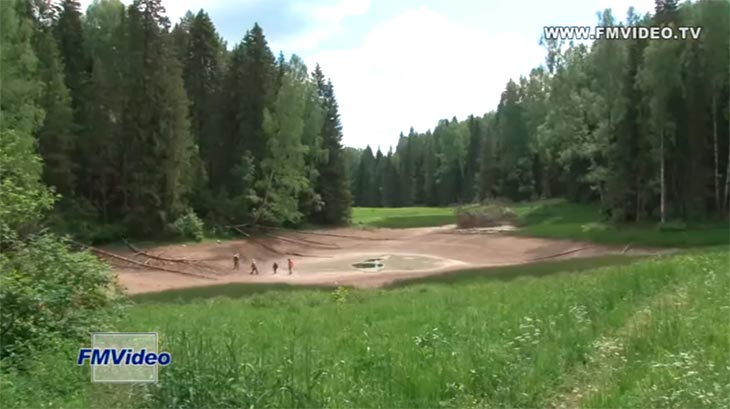 The villagers of Ostashata Kungur district, Perm region was left without a lake. Yesterday it was still, and today did not say the villagers. During the day, had gone underground three-meter depth of the lake Cave. People are worried, how would the same scenario have not disappeared lake Lyubimovskogo from which you drink 300 people and 1000 cows to a local farm.

The villagers of Ostashata come every day to the lake Cave or the place where it has always been. In the evening the lake was, and the next morning had disappeared, say the villagers, studying strewn with shells the bottom. The lake was not small. Nearly 200 meters in diameter and 3 in depth. The boys caught fish here.

Now the children resorted here with bottles of water to fill the pools, which is still a glimmer of life.

(Irina Kolyvanov, a resident of the village of Ostashata) – Tadpoles are very sorry, a lot of them remained in the water. They are together in little heaps. They could kill.

(Olga Kolyvanov, a resident of the village of Ostashata) – Found here is such a failure. Look how tube.

It seems that in this provalija, as it is called foibe local residents and left the water. The disappearance of a lake associated with the earthquake in the Sverdlovsk region and the nearby oil industry. If the waste wells do not fill with water, the district will dry up all the water. There is a third version. No wonder that the lake called the Cave.

(Olga Kolyvanov, a resident of the village of Ostashata) – it has Been speculated that Suhatskaja cave it is very big, and that it may be another entrance to this cave.

Near the village of Ostashata there is another lake – Lyubimovskogo. The murky water that does not meet epidemiological standards, drink 300 local residents and about 1,000 cows and calves on the farm. People are afraid, if this lake disappears, and the village, this place will not.

(Catherine Quick, a resident of the village of Ostashata) – We have somehow helped save this lake, and of course, we would want to, and drinking water we had.

For the administration of the rural settlement Zarubinsky the lack of drinking water in Osterath is issue # 1. Already done all the design work on the box in the water supply network of the village Zarek, but it’s 9 kilometers 700 meters. Cost is unaffordable expenses for settlement.

(Lyudmila Bushuyeva, I. O. Zarubinskyi of the head of the rural settlement) – was made of project-estimate documentation, which is 18-20 million to do water Ostashata, and if you have the budget settlement at 11.6 million, we such work themselves do not produce.

The construction of the aqueduct seems to be scheduled for 2018. District leadership promised to help finances. And while everyone is waiting for the return of the reservoir, because there is not far away, in the town of Kungur, lake Cookbook, called by the people Failed, the water of which disappears and returns. And maybe this walk at the lake bottom will one day become a legend.