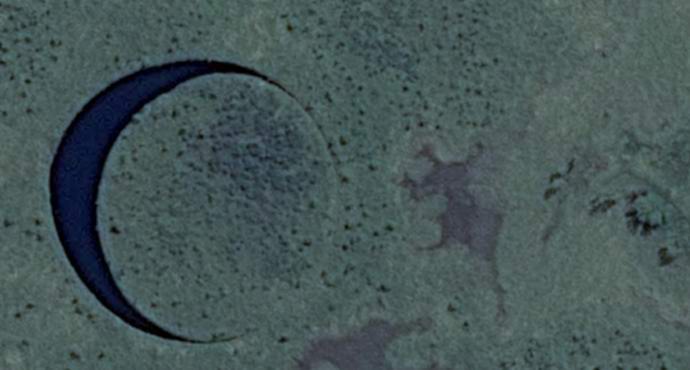 In the South of Argentina a helicopter pilot accidentally flying in the area was discovered an incredible, perfectly circular lake, in which floats the same round, but the smaller island. The diameter of the charm of the lake more than 118 meters (130 yards).

Enthusiasts went on a plane by coordinates of the location of the lake and it really exists not only on satellite photos. From the bird’s eye view of the strange lake looks like a Crescent.

On the surface of a perfectly round pond, swims the same round the island, which judging by the archival photos in Google Maps (34°15’07.8″S 58°49’47.4″W), every year changes its position and is then one, then the other edge of the shore, closely in contact with him.

Anomalous lake is very remote and impassable terrain. No settlements nearby and that’s why the lake remained unknown for many years. Found it not even with the help of satellite imagery,and the incredible luck when unusual lake said the pilot of the helicopter flying in the area.

Interestingly, the pilot reported his find to the local journalists, but they, for some incredible reason, are not interested in this anomaly and the news remained only local news talk and forget.

About the strange lake found out a local team of researchers unusual places and checking satellite images for coordinates specified by the pilot, found it really the most incredible lake. Now, these enthusiasts have created a “Kickstarter” project, trying to raise money to send a scientific expedition to the lake for its detailed study. For expedition requires 50 thousand dollars, but still managed to gather only four thousand.

How did this incredible lake, as the island keeps its perfect shape and its shores and the floating part is not destroyed, which is under the surface of the water, there is some depth. Who or what created such an incredible structure?