Indian woke up on the way to my own funeral 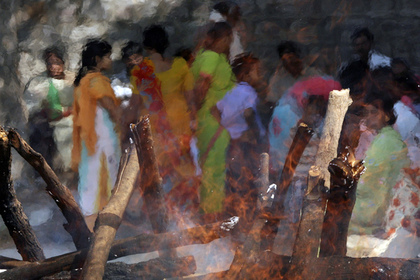 A resident of the village Darvaz in Maragogi district (Karnataka) woke up on the way to his own funeral. A month ago, 17-year-old Kumar Maruvada (Kumar Marewad) was bitten by a stray dog, then at the boys a few weeks had a high fever. When his condition deteriorated, he was hospitalized, and then connected to the ventilator.

The doctors explained to the family of Kumar, the infection spread throughout the body without the kit, it will not survive. Nevertheless, relatives that could not afford expensive treatment, we decided to take him home.

Later, not noticing his signs of movement and breathing, close decided that the young man died, and buried in accordance with national customs. However, when the funeral procession had to pass about two kilometers to the venue of the ceremony, Kumar opened his eyes, moved his arms and legs and he was breathing.

Soon the patient was taken to hospital in a serious condition and re-connected to life support. According to doctors, the Indian meningoencephalitis — an infection caused by a dog bite.