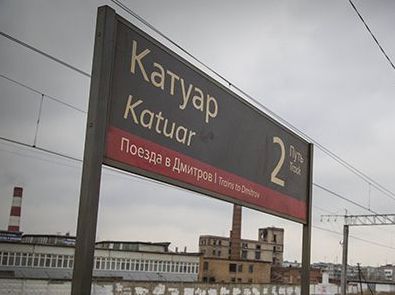 Fireballs, meetings with humanoid humanoids and the famous “prodigal” — that was nice “triangle” located twenty kilometers from Moscow.

At the time about the suburban anomalous “Katarski triangle” talked a lot. In 1997 near the village of citizen A. Todorov took a few photos of the UFO. After Russia and the US examination, it was stated that the image is genuine.

Pictures were taken July 11, 1997 at 23:00 during the festival, which was held in the pioneer camp “Cosmos”. A series of 8 pictures shows a consistent appearance of UFOs in the sky. A. Todorov said that initially did not notice the object as it went out from a brightly lit tent. He was just taking pictures of the surrounding countryside.

At the same time, were all the time on the street, people watched as the sky appeared a very bright star, which gradually became the object of oval shape. Then the UFO began to slowly move, until she disappeared behind the forest. Almost exactly a year after the events of 9 July 1998, Todorova again managed to capture a UFO in the same place.

Flying objects appear here quite often. As a rule, they are spherical shape and non-linear path of movement.

Catoire was famous not only UFOs, but the fact that the nearby forest has repeatedly been seen Bigfoot, which the locals call the demon. Perhaps these two phenomena were linked.

In our days about the anomalies around Katuar barely speak, but the locals still notice the UFO in the sky and go into the forest with caution.

Abnormal location — it is mostly coniferous forest, around which there are a dozen towns. Experts identify three main landmark on the map: town of Belyy Rast, as well as the railway station — Labor and Meadow. If you connect an imaginary line these points, we get an isosceles triangle. Inside it is the most unusual place that is considered anomalous area, the researchers said.

In 2015, the anomalies in the area has become more. Around mid-autumn in the vicinity of the nearby villages began to see UFOs.

— Now we have to get lost in a familiar place is easier, — says Sergey Borisov, who has lived in meadow for over fifty years. — Our forest is special, it is always quiet and beautiful. But lately, it becomes somehow not on itself… From parents and older people I have heard about meetings with “aliens”, and about the strange lights in the sky, but never thought that he would encounter something inexplicable.

Confusion of the old-timer is clear: from the beginning of October, the sky in the area “came alive”.

— Night flights, it is unclear what became the norm. Once a week, just something to note! For example, many saw in the sky two constellations “URSA major” at the same time! And then as if they were connected, and stars one of the “Mama bears” lined up… it Is scary when an object hangs over your house or suddenly begins to write contrary to the laws of physics pirouettes, shares observations Sergey.

His wife Lyudmila, too, was in an unusual situation:

— Walking day along the woods with the dog, I suddenly realized that was about a kilometer from the house, although the forest is within walking distance of our area. I panicked, tried to call home but the cell somehow didn’t work. And when I came back, suddenly much headache, and overall health was like I was awake, she recalls his mysteriously distant “voyage”.

In places with a magnetic anomaly the compass “frantic”, and even ultra-precision devices cannot build the exact route. In places of temporary anomalies crashing give the watch, either speeding up or slowing down the course. Well, the so-called “prodigal” can even the most experienced traveller to get to wander in three pines.

The explanation of this natural phenomena gives the common “the Gaia theory”. Its basic tenet States: “Our planet is a living supersuschestvo with their defined rhythms and cycles.” Well, living beings are like that… like — you scare, I will want to make a joke.