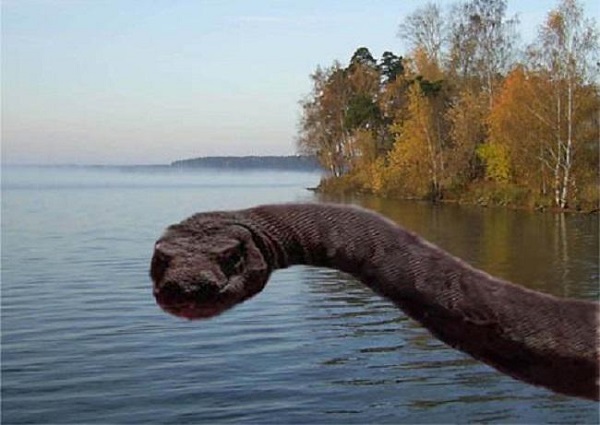 Of course, almost everyone has heard about the mysterious monster living in Loch Ness Lake, this Scourge monster is exploited by the Scots as they can to attract crowds of curious tourists, however, calm waters conceal many unsolved mysteries, and many are confident that Other lakes may be inhabited by prehistoric monsters. Let’s make a small trip.

This place deservedly deserved the first place, because of the essence that allegedly dwells in this lake, began to speak back in the 6th century AD. There is a suggestion that there dinosaur dwells there, which survived from prehistoric times. In 1880, the monster reminded of itself, on the lake, with complete calm and on a clear day, the sailboat on which people were drowned drowned. There were eyewitnesses who saw a lake monster. And in 1932 a lady alleged that she saw a creature resembling a crocodile, which crawled along the shallows to the lake.

The creature with the sonorous name of the Labynkyrsky Devil was discovered by the locals back in the 19th century. It should be noted that the pond in the form of a rectangle is at an altitude of 1020 m above sea level, at the bottom of the lake, to which more than 52 meters, there is an abnormal fissure. The creature is described as something strange and big, it scares a huge mouth, and the color of the monster is gray-dark. The most terrible thing is that the monster is not at all peaceful and able to get out of the water.

About the monster Ogopogo began to speak in 1958. He is described as a snake with a long body and an elongated neck, with the head of a horse, he has fins. There is a legend that a monster was turned a certain vagabond into punishment, since he killed on the bank of the lake the old man.

For the first time monster students were noticed, this event happened in 1985, legends began to walk, that the monster grabs birds and large animals and leaves with them under water for a meal. Later, the monster managed to even shoot on an amateur camera, rather the movement of a certain creature in the water. However, there is a theory that it was a large fish that moved so fast in the water.

Local claim that their lake is no less famous, because there lives a 15-meter monster with a beautiful name “Aydahar’s water spirit”. In general, this lake is considered an anomalous zone: people often drown there, many argue that there are some funnels dragged to the bottom, often in the lake begins to bubble with water.

It is believed that there is a lizard in the lake, resembling a plesiosaurus in appearance. There is a legend that the monster dined with warriors Batu, when they settled on rest near its shores. According to local, the monster has a long neck and mouth with huge teeth.

In 2000, the monster was seen by two girls, but many thought that it was childhood fantasies, curious adventurers decided to explore the place, eventually they found on the shore traces of unusually large sizes.

In 1960, three priests aroused the international community, saying that they noticed a monster in the lake, an expedition was organized in 2001, but it was not possible to find a strange creature.