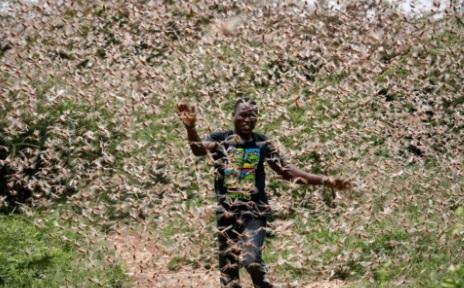 Thousands of farmers in Meru County are suffering huge losses as the Desert Locust devastates their farms every day.

Locusts appear at a time when most of the food grown in eastern Kenya is ready for harvest. These farmers are among hundreds of thousands of 14 other counties in Kenya affected by a second wave of locust plague that is twice as deadly as the one that hit Kenya in 2020.

The government said it has deployed spraying and surveillance aircraft to help control pests and noted that it has sufficient resources and is better prepared than in 2020 to fight.

Agriculture Minister Peter Munya told reporters that over 75 flocks have been registered in Kenya. “We cannot fight locusts in Somalia and Ethiopia, where they thrive. All we can do is fight them in Kenya as they breed in Kenya. It should be noted that the locust war may last until June, ”he said.

With a budget estimate of 3.2 billion shillings ($ 30 million) set aside to tackle the second wave, Munya said Kenya was well equipped to deal with the swarm and promised that in counties where livelihoods were affected, the government would intervene and will offer the harvest. and interventions in livestock production, which, inter alia, include the distribution of seeds and grains, clean water and fertilizers.

At the Mulika market in Tigania, residents complain that although the government has assured that everything will be fine, food is already scarce.