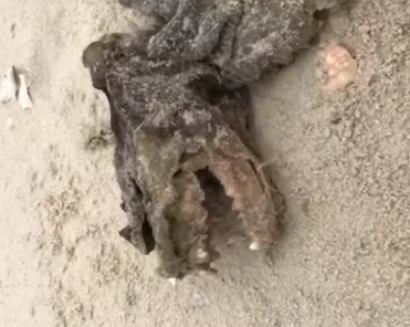 A woman walking her dog on a beach in South Carolina stumbled upon the creepy remains of a mysterious creature thrown ashore.

This terrible discovery was reportedly made by Erica Constantine when she and her dog visited a place known as Sunrise Park near Charleston.

Their usually ordinary trip to the beach took a strange turn when the dog noticed something strange in the sand and ran to explore.

When Konstantin approached a strange object that attracted the attention of her dog, she was surprised to find that it was the remains of a creature.

“It was the size of a small dog, but the structure of all this suggests that it is definitely not a dog,” she said. “I have been living here for about five years and have never encountered anything like this.”